I sent a news release for Hoosier Hysterical to every Indiana news organization I could find, thinking it would be an interesting bicentennial related feature for them. So far the result has been disappointing, with only a few local papers carrying it as far as I know (although a review should be coming out soon in WhatzUp, a regional Fort Wayne publication.)

I’m putting it up here in case anyone’s curious, needs an example for their own promotions (but—did I do it right?), and/or wants to pass it on … or happens to own a major TV network. Or a minor one.

Indiana history gets turned on its head in a new book, Hoosier Hysterical: How the West Became the Midwest Without Moving at All.

Mark R Hunter of Albion decided to celebrate Indiana’s bicentennial, and enlisted his wife, Emily, to poke some fun at Hoosier history and trivia. The result is a tongue-in-cheek romp through the state from prehistoric times on, covering everything from rotary jails, locks of Elvis hair, and even where the name “Indiana” was stolen from.

“When Emily didn’t roll her eyes at me, I knew I was on to something,” Mark says of the idea. The pair previously collaborated on two local history books: Images of America: Albion and Noble County, and Smoky Days and Sleepless Nights: A Century or So With the Albion Fire Department. They also put together a collection of Mark’s humor columns, Slightly Off the Mark.

Mark R Hunter is also the author of three novels and a short story collection. In Hoosier Hysterical, he riffs on everything from early American history:

“Some say Columbus actually got here hundreds of years before 1492, on a Viking River Cruise.”

“The purpose of those mounds remained a puzzle, until a twelve year old boy from Clarksville pointed out the natives seemed to have no outhouses. This came as a tremendous shock to archeologists of the time, who were known to be very hands-on.”

To the origins of the nickname “Hoosier”:

“Indiana flatboat crewmen … were called “hoosa men” after the Indian word for corn, “hoosa”. This theory fails to account for the fact that the Indians never called corn “hoosa”.

And even how the Indiana state flag ended up in a Batman movie:

“Some brave souls talked of sneaking into Gotham to steal our flag back, but … you know … Batman.”

Along the way, Hoosier Hysterical covers wars, economics, sports, and politics, as well as everything from weather to famous Hoosiers. But the authors are quick to point out that, despite doing a large amount of research and trying to stay true to the facts, their main emphasis was on humor. “The problem with history isn’t that it’s not interesting,” Mark points out in the book’s forward: “It’s that it’s not made interesting.”

He quickly adds, “So sit back and learn something fun about history. When you’re done, read this book.”

Hoosier Hysteria and all the Hunters’ books can be found at http://markrhunter.com/,

Mark R Hunter can be reached by e-mail at markrichardhunter@gmail.com. 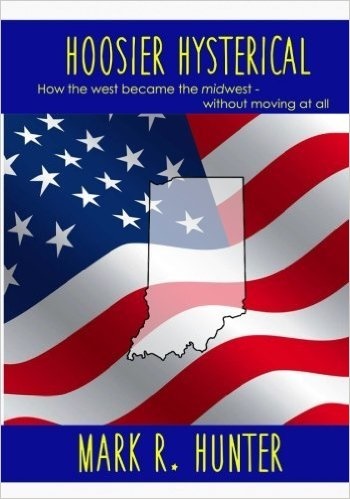