I was tagged by Mari Collier (on Facebook) to do a seven, seven, seven. That means posting seven lines from the seventh page of a work in progress, and then tagging seven other writers. I don’t do the tagging thing because I’m a buzzkill, so I’m doing a seven seven, which equals fourteen, which is my favorite number. So there.

This is from my boring old history book, which is also my humor book, which I’m currently polishing: Hoosier Hysterical: How the West Became the Midwest Without Moving At All. Turns out the lines are right at the end of “Forward: The Part Where I Explain Myself”:


As hinted at earlier, the name Indiana is thought to mean “Land of Indians”, for reasons that are probably obvious. Presently the capital of the state is the imaginatively named Indianapolis. “Polis” is a Greek word for city, or city-state. Thus, Indianapolis is the city of Indiana. We’re a plainspoken people.
On an unrelated note, “Acropolis” means high city. So does “Denver”.
So sit back and learn something fun about history. When you’re done, read this book. 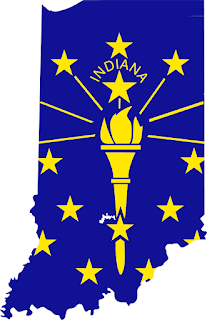