I normally send out a press announcement ahead of each book release. This one might not show up in newspapers, because Arcadia Publishing has a publicist, and I haven’t heard back yet on whether it fits with what they’re doing.
(I know, right? We have a publicist!)
A husband and wife writing team have produced a book that will give Noble County area residents a photo-filled walk through local history.
Images of America: Albion and Noble County will be released on August 24th by Arcadia Publishing, a South Carolina based publishing house with a catalog of more than 9,000 local history titles. The books are heavily illustrated with historical photos, which challenged authors Mark R. Hunter and Emily Hunter.
The Hunters spent months gathering old photos from numerous sources, including historical organizations, collectors, and residents with scrapbooks or boxes of black and white pictures. But that was only the beginning of the job: They picked out and organized the photos to best represent various Noble County communities and the county seat, Albion; researched local history; then wrote chapter openings and captions for all the photos.
The result is well over 200 images of towns, locations, and people in Albion and Noble County, the latest in Arcadia Publishing’s Images of America line. The book retails for $21.99, and is available for preorder on Amazon.com and BarnesAndNoble.com. More information can be found on the publisher’s website at http://www.arcadiapublishing.com/9781467114516/Albion-and-Noble-County, or at the author’s website at www.markrhunter.com.
As part of the book launch, Mark and Emily will give a presentation at 6:30 p.m. September 9th at the Kendallville Public Library, and will also have a book signing from 9 a.m. to 5 p.m. September 12th at the Stone’s Trace Pioneer Festival, near Ligonier.

The Hunters previously collaborated on another history book, Smoky Days and Sleepless Nights: A Century or so With the Albion Fire Department, along with a humor book, Slightly off the Mark, and a young adult novel, The No-Campfire Girls. Mark R. Hunter’s other books include the romantic comedies Storm Chaser and The Notorious Ian Grant, and the story collection Storm Chaser Shorts.
Mark and Emily live a few blocks from the historical Noble County Courthouse in Albion along with their loving but scary dog, Beowulf, and a cowardly ball python named Lucius. 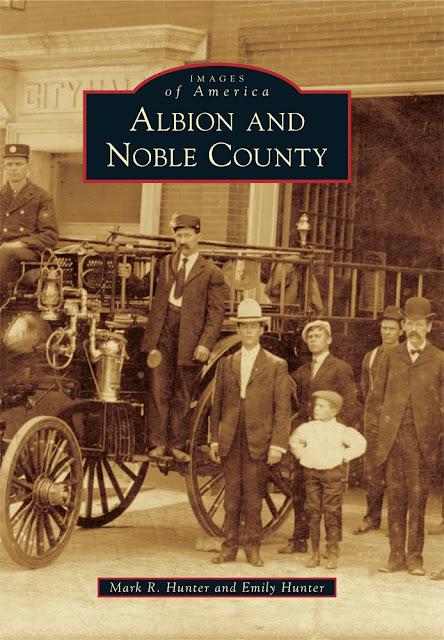