Seven Lines From My Work In Progress

I was tagged by Samantha Branham for the 7x7x7 challenge: seven lines from the 7th page of my work in project. I’m not tagging anyone, ‘cause I don’t do that, but if you’re a writer and it strikes your fancy give it a try! I suppose this serves as the official announcement of my next book project, in honor of Indiana’s bicentennial: A humorous look at Hoosier history. Don’t look at me like that, I promise you’ll like it.

(You won’t be hearing much from me for the next couple of weeks, due to research involving this very project.)

“Champlain made the first accurate coastal map of Canada, and also had a drink named after him. Unfortunately, he’d had several of those drinks first, and ended up misspelling his own name. As a result, he never got the credit he deserved for champagne. Upset by that, and also freezing, he headed south and became the first European to explore the Great Lakes area. So much for booze never being good for anything; thanks to Champlain Indiana became part of New France, with the promise that the French Empire in North America would go on for a long, long time.

And we all know how well that worked out.

However, the first white man to actually set foot in Indiana is believed to be Robert Cavalier Sieur de La Salle, whose name I’ll shorten to La Salle for obvious reasons.” 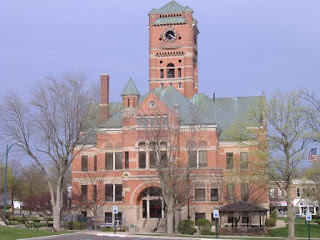 It's historical. No, it is. Well, maybe not by European standards.