Rikk Deckard is a bounty hunter in a futuristic city, who flies his hover car around while on the hunt for escaped androids who need to be "retired".

Gosh, that sounds an awfully lot like the plot of the movie "Blade Runner", doesn't it?

"Do Androids Dream of Electric Sheep?", by Philip K. Dick, was first published in 1968, and was indeed the inspiration for the 1982 film of the different name. The setting was moved for the movie from the post-nuclear war San Francisco of 1992 (later changed to the really far future: 2021) to an almost as dystopian Los Angeles of 2019, and where the hell is my flying car?!

Ahem. I can just imagine police having to investigate those accidents. 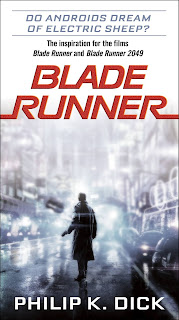 Deckard is given the task of hunting down six androids of a new model, practically indistinguishable from humans, and he has a very good reason for finding them: Each is worth a bounty of a thousand dollars, and with that kind of money he and his wife can trade in their electric sheep for a real, living, expensive animal--maybe even a goat.

Yeah, you heard that right. In the aftermath of a nuclear war most humans have migrated offworld (and each migrant is given their own android), while those who remain behind find animals so scarce that they're sold like some kind of gold plated work of art. The problem is, some androids rebel, kill their owners, and smuggle their way back to Earth, where police employ bounty hunters to find them.

Meanwhile, a secondary plot covers John Isidore, a man whose low IQ kept him from migrating, who finds himself helping the escaped androids. As Deckard goes through his list and gets closer to a final showdown, he's increasingly exhausted, and also begins to question the morality of his job. Deckard also discovers the six androids he's after may be only the tip of the electronic iceberg.

There's also a subplot involving Mercerism, a technology based religion that's, frankly, weird. But Mercerism becomes a factor when Deckard closes in on the last three androids and the hapless Isidore. 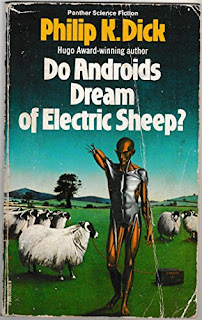 For those of you who watched the movie, yes, Rachael Rosen is there. Otherwise there aren't enough similarities between the book and the movie for me to really say one is better than the other--but they're both sufficiently bleak and downbeat to make a person want to drown in a bottle of Jack Daniels. Just the same, the author Philip K. Dick (no relation to Philip J. Fry) was great at characterization, and at setting the stage for his fictional worlds. It's a fascinating read and worth trying, although the final conflict and the ending both seem abrupt.