Almost a week ago, last Saturday, is the day he died.

Emily and I had stopped by to visit with him and his wife Cathy that evening. He's been undergoing treatment for lung cancer and other problems for years, and a couple of months ago had been given two weeks to live--but more recently he rallied, gained weight, and was doing a lot better.

But by the time we got there that night he'd taken a turn for the worse. A hospice employee was on the way to check on him, and the three of us were trying to get Jeff from the bathroom back to the living room couch when he collapsed and died.

I didn't think of it at the time, but in my fifteen or so years as an active EMT and forty years as a firefighter I've never had anyone actually pass away in my presence. Jeff quite literally died in my arms, surrounded by three of his loved ones. It was the end of the struggle for him, and the beginning of a struggle for us.

Of course, obituaries rarely tell you much about a person.

Jeff was a lifelong smoker, and that's the only bad thing I have to say. When you get addicted to something as a teenager, it's hard to think it might come back to haunt you decades later. why do I bring it up? Because we could have had him for another twenty years or more. It's worth noting that for those of you whose loved ones would like to keep you around, too.

Jeff and I were only a couple of years apart, and since our sisters weren't born until years later, we grew up basically as just two siblings. We loved each other, and we protected each other, and we fought like wildcats, and we tried to kill each other. He managed to shoot me with both an arrow and a BB gun, not to mention almost blowing me up more than once. We loved blowing stuff up, climbing places we shouldn't climb, and jumping things we shouldn't jump.

He put together all my models of starships and warships, and his of various cars and trucks. He was a hands-on doer, while I just liked to play and imagine. That would be a pattern our entire life: Whatever I had that broke, he would fix it. Jeff could take an engine apart blindfolded, and put it back together again without instructions. I could write. Believe me, when people needed help it was him they went to, and he usually dropped what he was doing. He single-handedly kept my first three cars together, despite all my youthful efforts to shake them apart. 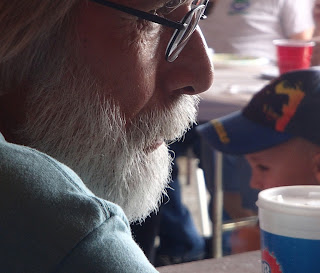 I never realized until many years later how much he tried to protect me. Oh, sure, we jumped from hay lofts, and made ramps for our bicycles, and fireworks? Don't get me started on fireworks. Just the same, he would try his best to protect me from people, and life, and other heartbreaks. He and Cathy were not able to have children, but he loved kids, and wanted them protected, too.

His teenage years were a little shaky, but by eighteen he was working, and he worked full time for the rest of his life. He wasn't a joiner; he wasn't part of volunteer organizations or other groups, although as I said earlier he was always ready to jump in and help. Like me he was something of a homebody, but he did a much better job of it than I did. Basically he wanted to pay his bills, take care of his home, see his friends and family, and not interfere with the lives of others. Boy, we could use more people like that.

He put ketchup on everything.

He was a fan of science fiction as I am, and wanted to see the new TV show, Picard, so Emily and I bought him season one. But his birthday is today, and he was gone before we could give it to him.

So, that was my brother. Life is duller for him not being around. My job now is to make it less dull by making sure people remember him. Forgive me, but for the moment this writer can't do any better.