I think I've said this before, but one wonders why I should bother reviewing a twenty year old book whose author surely doesn't need my help.

Ah, but it was new to me. Emily and I found Neil Gaiman's Stardust on audio book, read by the author himself, and enjoyed it immensely during some long trips over the summer of 2019. (I wrote this in early 2020, so if it seems a year old ...)

In the mid 1800's young Tristran Thorn lives in a little village called Wall, which gets its name from a literal wall with one doorway ... a door to the world of the Faerie. He's out to win the heart of the beautiful Victoria, so when he sees a star falling on the other side of the wall he vows to fetch it for her. She agrees to marry him if he brings back the star, but doesn't really take him or his quest seriously.

What he doesn't know is that when a star falls in the other world it takes the form of a young woman; and that Tristran isn't the only person in search of it. Her fate is intertwined with brothers fighting over a lordly title, and witches trying to prolong their lives. Then there are ghosts, an enchanted bird, air pirates, and, of course, a unicorn. 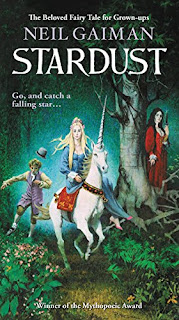 Stardust is very much a journey tale, created first as a "story book with pictures" -- meaning my wife and I missed part of how it was originally intended to be experienced. (It was also turned into a movie that we haven't seen.) The text by itself is good enough, as Tristran makes his way through the faerie world, meeting all sorts of quirky characters and encountering--often without knowing it--the people who are competing with him for their now more or less human prize.

Gaiman knows how to spin a tale. The story actually begins a generation earlier, with events that at first don't seem all that connected with Tristran's adventures. I've always admired authors who managed to weave a story that must have required scorecards, family trees, flow charts, and maybe one whole wall of notes. Luckily it's not all that complicated for the reader (ahem--listener), and if anything's the mark of a master storyteller, it's that.

There are plenty of worse ways to spend your time than to track down and read everything Gaiman writes, and I do believe I might just try it. And you could do worse than starting with Stardust, a fun and surprisingly deep fantasy that--believe me--is much more for adults than kids.
Collapse