As I mentioned last post, Emily and I visited a National Park for the first time last week. We've been next door several times, to the Indiana Dunes State Park, but hadn't moved one stop over. But in our defense, there was no National Park there, until February of just last year. 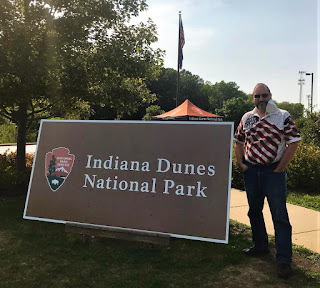 However ... it's been a National Lakeshore since 1966. We've been in National Forests, and National lots of other things, but there's something about a National Park that's special, and now we have one just a couple of hours from home. Our first visit was actually pretty short--just a few hours--so we'll be coming back to explore further in the future. Meanwhile, here and in a future post are a few photos of what we've seen so far. (You can click the photos to enlarge them.) 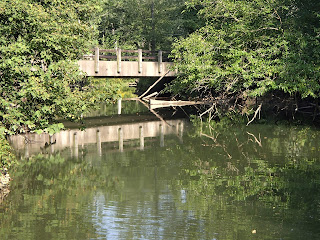 America's 61st National Park has more than 15,000 acres of forest, swamps, lakeshore, and--naturally--dunes. We started out on a trail called the Bailly/Chellberg Loop, which is near the Little Calumet River and took us to ... a house. 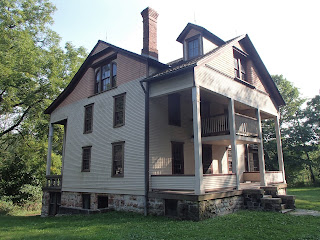 Well, yeah, but you have to realize our National Parks are all about history, too. This is the home of Joseph and Marie Bailly, who arrived in  the area just six years after Indiana became a state, and started to build a homestead. At the time there was the Kankakee Marsh, which blocked travel to the area--it spread out over 500,000 acres. So the Bailly's were among the first, and eventually began to build a new house--this house. But Joseph Bailly died in 1835, just before it was completed. 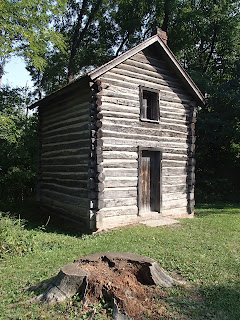 This, an outbuilding on the Bailly homestead, is a bit more like what the original home would have looked like. The homestead is still a bit isolated, which gives a better idea of what it might have been like back then.

Where did Bailly get the money to start updating? The Federal government paid him $6,000 for counseling the Potawatomi Indians on the Chicago Treaty, which put northwestern Indiana in the public domain. The homesteading public, you understand, not the native public. 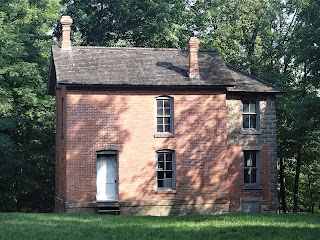 This more modern house, which I understand was for Bailly's daughter, is a bit more modern and was between the original house and the river. There's a lawn on one side of the area, and the homestead gives such a peaceful feeling that if I'd had a book I'd have just propped myself against a tree and spent the day reading. I mean, I had a Kindle app, but that would have ruined the atmosphere. 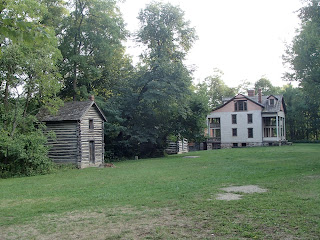 Here's a wider view. We didn't stay for long, because we wanted to hit a short trail that would take us a mile and a half or so, so we could also check out the Chelberg Farm and a couple of other sites.

But I didn't realize that we needed to go back for that trail loop. Instead we went on across the river. And that trail was much, much longer.

Totally worth it, though. I'll post some more photos later--social media and a ton of pictures just don't seem to mix for me.