Here's the interesting history of the "Riviera of the Middle West":

For several years I got Indiana Beach tickets through my work, and would take my kids, and sometimes their friends, there. Later Emily and I went, once taking the grandkids. Like the local drive-in theater I've talked about before, it seemed like it was becoming a multi-generational thing.
Now, although there are efforts to keep it going, the almost century old Indiana Beach Amusement Park seems gone for good. 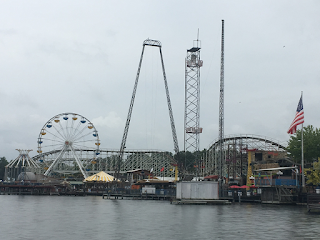 The last time we visited was in rainy, dreary weather, which maybe I should have taken for a sign. 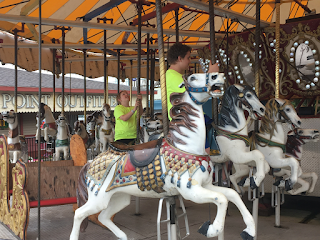 I took the news personally, because I just finished changing the title and doing a few corrections to my so-far unpublished young adult mystery, Summer Jobs Are Murder (formerly Red Is For Ick, but I'd rather we all forget that.)

The story's protagonist is a teenager who investigates a murder while also working her first job--at an Indiana amusement park. Since Indiana Beach is the only amusement park of its size within easy driving distance, I used it as an inspiration and model for my fictional park. Details were changed, of course, to protect ... well, me. I'm getting ready to send that manuscript back out on the agent hunt, so I'll let you know.

This isn't my first time stealing, as the basic layout of the town of Hopewell, in my published novel Coming Attractions, is based on Kendallville, Indiana. In the immortal words of Thomas Edison, "Why invent, when you can steal?" (Kidding!)

So I'm taking this loss a bit hard, and I hope against hope someone will step in to get the park running again. Meanwhile, I'll continue my efforts to show non-Hoosiers that there is still more than corn in Indiana.