Yes, I posted about My Funny Valentine last week, but that was before I found out the e-book version will be free from now until February 14th. That's a heck of a buy, by which I mean you don't have to buy it. 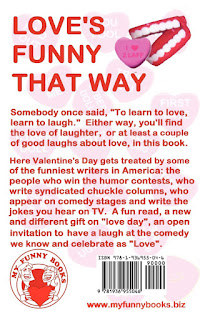 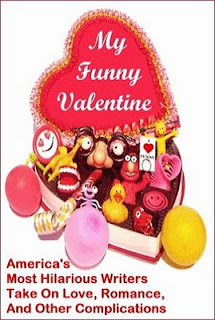 Did I mention free?

Of course, I have a piece in there, which is why it's "our" anthology. Look for me near the middle, right where the heart is; I'm the one who had to sleep in the car. There are print copies available for anyone who wants one as a gift, but you can get your free e-version over on Amazon:

Some samples:
I don’t need a special day to be awkward, uncomfortable and falsely selfless. That’s what dating was for. Blythe Jewell

This is not to imply that the only men who remember Valentine’s Day are philanderers. Some of them, for example, are only thinking about cheating. Greg Podolski

We lovingly refer to it as Valentine’s Day because "Sex for Chocolate Day" was vetoed by the greeting card industry. Leigh Anne Jasheway

Valentine’s Day is about those five little words: Charge it to my Visa. Jim Shea

Clubbing a man over the head with a bat and dragging him into your love den has been interpreted as somehow criminal, by people who belong to fringe groups like the "police" and the "courts". What in heaven’s name is a girl to do?! Kate Heidel

GRADY HARP, Hall of Fame Reviewer, says:
"One of those `must have' books not only because it is terrific reading but also because it has a lot to say about contemporary relationships. Kudos to a crew of writers who are very in the know about love and relationships. This is a little treasure of a book with some of the most terse humor being written today!"