You may have heard of Outlander, a little tale of time travel and kilts that spawned, oh, several dozen sequels, and a TV series that's headed into its sixth season. Being a fan of time travel stories, I agreed readily when my wife wanted to watch it, and we quickly became hooked.

Naturally, that led to reading the book. It's a long book, and I'm told the first novel is the shortest of them.

But it shares with the series a gift for detail, which should satisfy history buffs even as the story rolls along fast enough to keep the casual reader entertained.

Claire Randall is a World War II nurse, reunited with her husband, a history and genealogy buff, at the end of the war. They're vacationing in Scotland when they discover an isolated circle of standing stones, not uncommon in that country. It's the kind of thing you shouldn't visit again right after a group of white-clad women do a spooky dance inside it, but Claire is the curious sort.

Next thing you know, she's right back in a war again, this time between the English and the Scottish ... in 1743. Women are second-hand citizens, Claire has the healing powers of a witch, and there's some guy who looks exactly like her husband threatening her at every turn.

Oh, and then there's James Fraser, that redheaded muscle man in a kilt, who's as close to being the perfect man as the 1700s could produce. From the moment she dresses his wounds ('cause he's an awesome warrior man, don'cha know), fate keeps bringing them together, until she finds herself torn between her past life, which is in the future, and her present life, which is in the past.

Outlander is a slam-bang adventure, a hot (heavily R rated) romance, and a meticulously researched historical novel. I found myself fascinated by the detail: Diana Gabaldon clearly did her due diligence, but doesn't overwhelm the reader with so much detail as to make the story boring. Her characters are well drawn, and there are plenty of twists to go around. Just keep in mind that many of those twists are on the violent side, and on at least one occasion the sexually violent side.

Yes, I plan to read the other novels, although considering the size of my present reading list, I'll probably have the TV series finished, first. 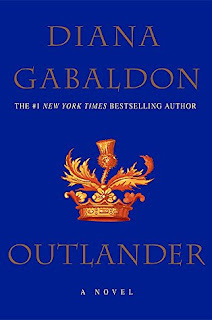