Fat Charlie Nancy is just a normal guy with a normal job and a normal girlfriend, which tells you, considering this is a Neil Gaiman book, that things are about to go very, very sideways for him. Sure enough, he soon learns that his father has dropped dead while singing karaoke in a Florida bar.

Fat Charlie hates his father, who seems to have made it his mission to humiliate his son, including giving him his nickname. Finding out that Dad was a god named Anansi doesn't change Fat Charlie's opinion a bit. But that little revelation is only the beginning, as Fat Charlie's brother, Spider, shows up and turns Fat Charlie's tiny spare bedroom into a huge pleasure palace.

Then things get weird. 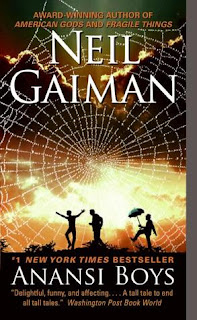 Nobody's better at taking regular people and dropping them down a rabbit hole than Neil Gaiman. He did it brilliantly in American Gods, and here he brings back one of those gods, Anansi, to torture his unsuspecting offspring. Fat Charlie, once settled into his London life, now finds himself ping-ponging across the Atlantic Ocean, with his job, relationship, and life in jeopardy as he desperately struggles to figure out what's going on.

After all, there are also few authors better at drawing humor out of their character's misery, either.

Although not as complicated as American Gods--there's only one god involved here, mostly, and way fewer characters--Gaiman weaves a great tale of rich and eclectic people, in a (shall I say it?) web that gradually draws their stories together. It's delightful, chaotic, and great fun, written in a free flowing way less experienced writers just couldn't get away with. I have a feeling Gaiman works hard to make his writing look like it's not hard work.