I sent out a press release about the Avilla Freedom Festival appearance; it may seem silly, but silly is what I do best:

A local author will make his second trip to the Avilla Freedom Festival this year, along with some of his family.

Mark R. Hunter of Albion will man a booth at Vendor Alley along with family members, June 22-22. The vending booths open at 4 p.m. Thursday and Friday, and they plan to be there from 10 a.m.-6 p.m. Saturday. Although Mark can’t be there the entire time due to work commitments, signed copies of his ten books will be available. The booth will also be manned by his sister-in-law Cathy Hunter, who sells original jewelry, along with other family members.

Mark R. Hunter, along with his wife, editor, and sometimes co-writer Emily, have ten printed works. His most recent is Coming Attractions, a romantic comedy about efforts to save an Indiana drive-in movie theater. The year before that Torrid Books published another novel, Radio Red. Set in Michigan, it’s his first published work not connected in some way to Indiana.

Together the Hunters specialize in not specializing, as their books cover several genres. Mark Hunter’s solo works are romantic comedies and a short story collection; he and Emily worked together on books covering history, humor, and young adult fiction. Together they’ll have copies of ten books available at the Avilla Freedom Festival, at prices discounted for the event.

I actually struggled with it quite a bit; it's not your normal book signing thing, what with us sharing a booth and me not being there the whole time. (Also, I'm not sure how much Emily is going to be able to attend; both our work schedules are crazy in June.) But I'm kind of hoping that even if I don't sell a huge pile of books, people will still stop by and check out Cathy's jewelry. I've got one of her paintings hanging up at my house--artistic type people run in the family. 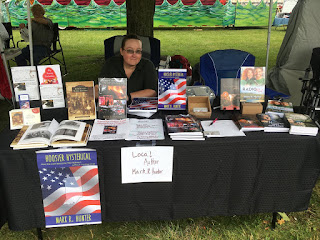 I've been on edge recently; more stressed than I usually am this time of the year. There are a few reasons, but one cause became apparent while I was going through old blogs, and came upon this one from five years ago. (Never mind why I was going through old blogs.) I always enjoy author appearances, once I get there and everything's set up. But from the time I sign up for one until things are set up, I'm a walking, shaking pile of anxiety.

Why My Subconscious Hates Book Signings

I’m sure some writers approach public appearances with the confidence of TV’s Richard Castle, who swaggers into every room like he has the world by the keyboard. Then again, maybe not … Castle seems to have become a bestselling novelist without ever actually writing. In other words, he’s every writer’s dream.

I, on the other hand, have to actually pound away at the keyboard to produce a manuscript. Probably I’m more representative. If that’s true, then most writers approach book signings with no confidence at all. What’s worse? That no one will show up, or that they’ll show up to point and laugh at your temerity in thinking you actually deserve any sort of success?

Like most things, the anticipation is worse than the reality. (Not with dentists. Oh, not with dentists.) Still, as I approach the next book signing, I can’t help thinking: Is somebody going to finally call me out?

Dude, you suck. What makes you think people will actually want to read your books?

It used to whisper, “You’re a horrible writer!” Finally, after a few decades, I came to accept that I was actually a pretty good writer. Then it started whispering, “There are millions of good writers! You’re a little minnow in a big sea. You’re so pathetic that even your subconscious can’t come up with a cliché that doesn’t involve little fish in the ocean.”

Other times it gets bored and switches: You’ll never write full time! You’ll die at a keyboard, working two full time jobs and never taking the time to vegetate on the couch with chips and dip.

“Oh, yeah? Well, my wife and doctor won’t let me eat chips and dip anymore, so there!”

Nice riposte. Use that in your imaginary Pulitzer speech.

Is it any wonder, then, that I hate promoting myself? Okay, I have a book signing coming up. (at the Avilla Freedom Festival this time, June 20, 21, and 22.). So why can’t I just yell it out, rather than writing some long article about it? “Hey, be there! I’ll have all my books!”

You’re pathetic. That’s your own home turf, what are you worried about? Try having a book signing in Chicago, see who shows up there.

“You’re my subconscious, you just called yourself pathetic.”

You can’t win when you take on your own subconscious.

By the time June 20th rolls around I’ll be too worried about the details of the signing to let my inner voice bother me. I’ll sell some copies of my various works, go home happy that anyone bought any at all, and go back to work on my next book project.

Then the voice will start whispering again. But you know what? I’m a good writer, by gosh, so I’ll ignore it … at least, until it’s time to send in the next manuscript.

Oh, the blog with all the details of the upcoming appearance is here: