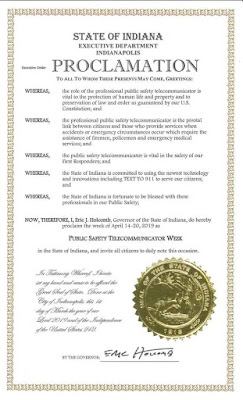 I've been taking 911 calls for so long that they were originally 91 calls.

Well, it seems that way, anyway. It turns out National Public Safety Telecommunicators Week predates my full-time employment in the emergency services by ten years, and can we possibly shorten that name down a bit? By the time I finish saying National Public Safety Telecommunicators Week, the week is over. I'm going to call it ... NPSTW. I know somebody who got their Bachelor Degree at NPSTW, although they've since married. Go Bulldogs!

Anyway, I started with the Noble County EMS as a seventeen year old trainee in late 1979, and joined our volunteer fire department in 1980. But it wasn't until December, 1991, that I took an actual paying job in the area of emergency services, as a jail officer with the Noble County Sheriff Department.

Within a few years I got tired of getting sick all the time. Seriously: Those inmates breathed so many germs on me while getting booked in, I thought I was in a sequel to The Andromeda Strain. So I went into dispatch, trading physical ailments for mental ones. 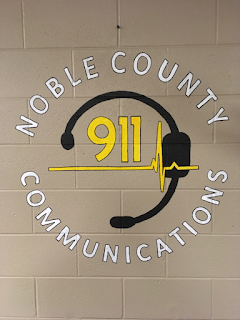 Unknown to me, way back in 1981 Patricia Anderson, of the Contra Costa County Sheriff's Office in California, came up with this idea to give tribute to, um, NPST, or as I'm going to call them, dispatchers. Yes, I know "dispatchers" doesn't tell the whole story, but my typing fingers are tired.

Oh, who am I kidding? All of me is tired.

Isn't it something? I've been here for almost twenty-eight years, and dispatching for about twenty-five of those. I've been here so long that when I started we had only one computer, to get information such as license plate and driver's license returns, using DOS.

Get your grandparents to explain DOS to you.

My wife points out that taking information was difficult back then, because we had to received 911 calls by smoke signal, while carving words onto stone tablets. I'm fairly sure she was kidding.

I've been here so long I could take full retirement at the end of this year. Full retirement pay! Sadly, I haven't figured out how to make up the difference in income, but I'm hoping my book sales will pick up. The good news is we don't make all that much to begin with, so the loss of income wouldn't be so much of a shock ... but it would be tough learning to sleep through the night.

While I joke about it--mostly to keep from crying--things really were easier back then, when it comes to learning the job. Our computer systems do make it easier to help people these days, but astronauts don't train as much as our rookies do. Spaceship vehicle pursuits are faster, though. The point is, I'm not sure I could make it through training, if I started today.

We had one the one small computer screen when I started. Now I'm looking at seven flat screen monitors, not including the security and weather screens. Our report was written (in pen) on a single piece of paper about half the size of a standard sheet. Today we have a Computer Aided Dispatch (CAD), radio screen, phone screen, mapping screen, recorder screen, 911 texting screen, and a screen to keep track of everyone's duty status. We also have a screen to keep track of screens. Those are just the ones we use regularly. 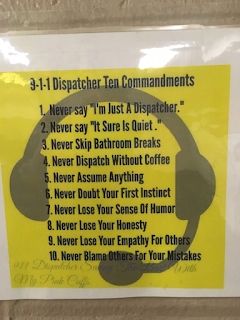 Me, I'm pretty burned out at this point, and some of our calls can get rough. I have all the symptoms of PTSD; some of them include:

Experiencing a life-threatening event, like when the dispatch pop machine ran out of Mountain Dew;

Flashbacks and nightmares, such as reliving the night we ran out of Mountain Dew;

Avoidance, such as staying away from places that don't have ... well, you know.

Depression or irritability, which I just now realized might be related to consuming too much caffeine;

Chronic pain ... wow, that one hit me like a pulled back muscle.

You know, looking down that list you have to wonder, as I check off each and every box: avoidance, numbing, flashbacks, being on edge, overeating ... HEY! Who the HECK took my meatball sub out of the break room fridge! I'm HUNGRY!

Where was I? Oh, yeah. You have to wonder:

Why the heck am I still here?

Here's the thing. I've worked in retail; in factories; as a security guard and jail officer; as a radio DJ; I once made two bucks an hour growing worms for fishing lure. And for all the emotional turmoil, all the mental stress, all the physical ailments, all the days when I wanted to scream, and so desperately wanted to NOT go back into work the next shift ...

Dispatching is still the best full time job I've ever had.

Of course, I'm not a full time writer, yet. And for that I'd only have to deal with one computer screen. 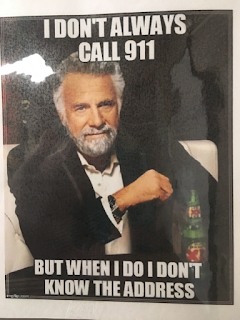