Thanks to everyone who read, and especially commented on, my post on the 50 Authors From 50 States blog! As for the giveaway, I didn't have a hat, so I made each commenter a slip of paper and mixed them up in ... an extra large coffee cup.

A coworker, who was very happy there was no actual coffee in the cup, then pulled out the name of William Kendall, who wins a free book! And no, that's not as cool as a free car, but I don't sell cars.

As for those who read the blog, Annette Snyder sent me a list that shows 176 visitors from the USA. But here's a surprise: The next highest number of visitors were from Ireland! No, I don't know why. After that came France and Germany, then "Unknown Region", which I think is one of the former Soviet republics. On a related note, there were also visitors from Russia, as well as the Ukraine, United Kingdom, and--as might be expected--Canada.

Otherwise there's not much to report. Emily is busy scanning and adjusting photos for our Albion Fire Department photo book project, while I've been working on the rough draft of a humor collection, under the working title of Still Slightly Off the Mark. It will be based on humor columns I wrote for the newspaper between 2000 and 2002, and rereading them for revision has made me realize just how much has changed since then.

Spring is springing--more or less--and we got a chance last week to go to the drive-in theater that was the inspiration for Coming Attractions. Shazam, was it fun! 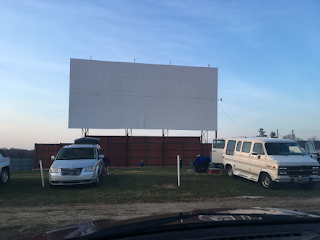 On a related note, Emily is back with her horses at the Pokagon State Park Saddle Barn, although until Memorial Day they're only open on weekends.

All signs of spring ... yay! Hope you all get a chance to get outside and enjoy it, when weather permits. And, for those of you in the upper Midwest and Plains States ... I'm so sorry. 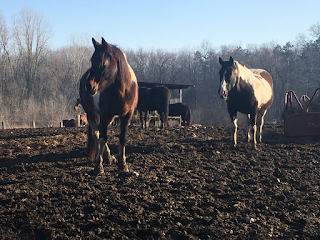 There's a new review of The No-Campfire Girls up on Amazon:

I like it, because at no point do they use the term "talentless hack".

Half the proceeds from sales of that book still go toward supporting the Missouri Girl Scout Camp Latonka, and it's only ninety-nine cents for the e-book version, so get your copy right now!

Or, yeah, you could wait until lunchtime, if you're hiding this from the boss. Just don't forget. 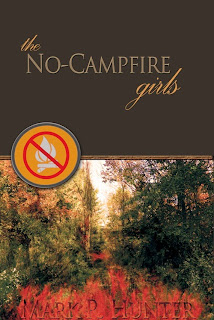 Remember, every time you buy a copy, a Girl Scout gets her Fiction Reading Patch. And if they don't make one of those, they should.