So, we paid a little money to promote The No-Campfire Girls on the Fussy Librarian newsletter, which resulted in a few sales. Then I doubled down by letting social media have it with both barrels. I sent out a newsletter, then put up two different posts on multiple social media platforms, including some I still have never heard of and others that don't exist yet.

(By the way, FaceBackTalk will be huge.)

I even tagged some celebrity former Girl Scouts with what amounted to begging. Up to this point, the total effort has produced zero results, in sales or reviews. (To my knowledge; sometimes these things move slowly, like my bathroom sink.)

So the next time your father says "you get what you pay for", stop snickering and pay attention.

I'm tempted to paraphrase Davy Crockett by saying social media can go to hell--I'm going to edit. But after Crockett said something like that, he went to Texas and died at the Alamo. I'm not sure I want to fight to the last adverb.

Besides, social media can be pretty cool, what with the family's baby pics and the backdraft simulators, so as long as you don't get addicted or expect too much from it, it's okay. Another besides: I was once followed on Twitter by the original Becky from "Roseanne", so I've already had my fifteen minutes of fame. (And after she followed me her Twitter account disappeared; coincidence?) 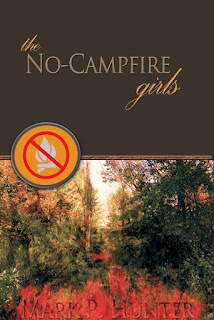 Besides X3, I've gotten a lot of moral support from friends and fellow writers online ... so here's a reward in the form of a short excerpt from The No-Campfire Girls. It's free. You get what you pay for.


Cassidy stopped in her tracks. “Oh, no.”

For a moment Cassidy listened to the voices, then she gripped Beth’s arm. “Whatever you hear from now on, just remember this: Only half of it is true.” She took a deep breath, then marched on toward the barn’s entrance.

Director Harris stood inside, along with two wranglers—former Lookout Girls who now specialized in the camp’s horses. The wranglers looked greatly amused. Mrs. Harris did not.

The object of their attention was an old man who stood with his arms crossed. His craggy face was brownish-red, his nose a great tomahawk-like hook, his eyes brown and clear. “Whatever might help should be tried, Director Harris. We accomplish nothing if we don’t try.” He wore jeans, work boots, and, despite the heat, a long sleeve red flannel shirt and cowboy hat. Even the horses stood still, fascinated by him.

“Oh, my gosh.” Beth whispered to Cassidy, “He looks like a full blooded Indian!”

“Half Cherokee. But he’s full of something.” Cassidy took another deep breath, then stepped into the barn.

Cassidy knows this guy. Beth followed the other girl in. Well, it made sense: Unlike Beth, Cassidy lived around here, and the nearest city wasn’t all that big. Heather claimed the nearest mall called her name from three hours away.

Mrs. Harris didn’t notice them at first, but the old man looked around. “Osiyo, Cassidy.” He sent her a mild smile. “Maybe you could explain to your director that I do an effective rain dance.”

“Call me Simon. I don’t stand on ceremony.” He looked at Mrs. Harris again. “Although I do know how to conduct ceremonies.”

A moment of silence followed. Everyone, Beth realized, looked at Cassidy.

“I didn’t question your ability to do the dance, Simon. But you’re here to teach archery in place of having campfires—not to change the weather so we can have the campfires. I don’t think it’s proper to do what amounts to a religious ceremony in front of all these girls.”

Beth didn’t see how a rain dance would be any worse than the Lookout Girl rain song they’d sung at breakfast, but something told her bringing that up would be a bad idea.

Simon stared at the director for a long moment, then whipped off his hat to uncover a full head of pure white hair. “The politically correct police strike again.” He bowed to Mrs. Harris, nodded to the others, then walked out the door. The horses watched him until he disappeared, as if waiting for his next trick.

The wranglers tittered a little, until Mrs. Harris threw them a glare and they went back to work. Then she turned her attention on Beth and Cassidy. “You know Running Creek—Simon?”

“He came well recommended, but I’ve never heard of him doing rain dances before. One has to wonder if he’s for real.”

“And what’s the other half?”

Beth looked at Cassidy. How did she know so much about the old man?

“Irish. I think the word we’re looking for here is blarney.” Apparently too rattled to ask the girls why they were there, Mrs. Harris walked out the door.

After the director left, Beth cleared her throat. “Blarney?”

“I think it kind of means … bull … droppings. I wonder if Mrs. Harris is half Irish, too.” Cassidy smiled. “They’ll continue to not get along.”