As we left the theater after seeing Ready Player One, I told my wife, "I think that's the most fun I've had at the movies since Deadpool".

Not the best movie, mind you--but certainly the most fun. However, by happy coincidence, Ready Player One is also a great movie.

The concept is that virtual reality has sent much of the world's population into a computerized universe that's way better and more fun than the real one, which of course leads to the real world  getting that worse. In other words, it's the way things are pretty much headed in real life. By 2045 everyone, including Wade Watts (Tye Sheridan) is going into the OASIS, where you can be anyone you want and do anything you want. A good example of this is right at the opening, when we see some people climbing Mount Everest--with Batman.

Wade lives in a trailer park so overcrowded that the homes are literally stacked on top of each other, and won't that be fun the next time a tornado comes along? He's competing to find clues to a contest that will give the winner control of the OASIS, along with the fortune of its creator, James Halliday (played with relish by Mark Rylance). When Wade wins the first of three challenges, he gets on the radar of some very powerful people, which ends up endangering both the OASIS and the real world of Wade's friends and family.

Now, let's be clear: Ready Player One is another science fiction action-adventure, nothing more. But in the hands of a master like Stephen Spielberg, nothing more can become ... more. From the moment Wade hops into the Delorean from Back To The Future to race the Akira motorcycle, Bigfoot, the A Team van, and the freaking Batmobile, you know you're in for something special. And that's before King Kong shows up, and by the way, that's just in the first ten minutes. It's breathless and breathtaking, spectacular and funny, and the only thing that's missing is a John Williams score--although having said that, Alan Silvestri does a great job weaving in well known themes for a memorable soundtrack.

By the way, is there any SF fandom Simon Pegg hadn't been involved in at this point?

Spielberg has said Ready Player One is the most difficult film he's made since Saving Private Ryan, twenty years ago, and the third hardest ever behind Jaws. I believe him; but he pulled it off. Oh, and yes, there are themes and deeper issues, as well as plot holes along the way.

If you're into pop culture references, you'll probably want to see Ready Player One more than once, just to catch everything. For me it was one of the fun parts of the movie, and honestly I'm bursting to shout out all the references, from the obvious (The Shining) to the blink-and-you-miss-it (Firefly). And if you don't recognize all those shout-outs ... doesn't matter. Still a great movie.

Oscar Potential: 3 out of 4 M&Ms. There's quality in every aspect of this production, but sadly, I wouldn't be surprised if the Academy totally ignores this picture as being too much fun for their lofty standards. 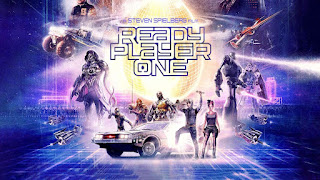