We all know Dorothy Gale of Kansas, although you probably imagine her as a teenage Judy Garland, while I picture her as a blonde eleven year old. (There were all these books, you see, and ... oh, never mind.)

In Shadow of Oz Dorothy is all grown up, and now a drone office worker in New York City (apparently in modern times, which would make her something like 125 years old, but never mind again). She's miserable and pretty much a zombie, and not in a fun way, when one day she gets attacked--by a tree. Then by a murder of crows bent on ... well, murder. Then she's rescued by a man of horseback ... who's made out of clay. The man, not the horse.

Then things get exciting. It seems Dorothy, despite being an outsider, was once ruler of the land of Oz. In her absence the country has been conquered by an old enemy, and to save it she must find her way back, regain her memory, beat the bad guys, and recover a gem called the Ozma that's the heart of Oz, pretty much literally. She'll meet old friends along the way, but boy, do they have their work cut out for them.

Shadow of Oz benefits from a breakneck pace, Indiana Jones style, although it can also be exhausting. While I would have preferred to see more of the book characters I'm fond of, Damon wisely sticks to supporting characters from Baum's first three Oz books, all familiar to those who've watched the MGM version of The Wizard of Oz and Disney's Return to Oz. Many of the later characters have been forgotten by anyone who isn't familiar with the books, and would confuse the casual reader. But I'm going to put them in my own Oz book, anyway! (Baum's fourteen Oz books are in the public domain.)

It's nicely plotted and has some fantastic twists. (Shadow of Oz, not my Oz book--that's not written yet.) It can also be read as a standalone book, which is important to some readers, although there are sequels. Some of the fight scenes seem a little long, but you aren't likely to get bored. Overall the characterization is good, but a romance develops that's totally unreasonable considering the time factor involved. (Although, hey--these things happen in stressful situations.) There's a substantial amount of PG violence, and some stuff might be disturbing to the kiddies. Damon, I suspect, is trying to write for an adult audience while maintaining the wonder of the originals, but it comes off more gritty than wondrous.

Now, as a writer there are a few things that bothered me more than they're likely to bother the casual reader.  The story is very active, but there's a lot of passive voice--avoiding that has been drilled into me so much that it stood out. There was a bit too much more telling than showing. But there have been bestsellers that I have the same complaint about, so who am I to say? Overall, I think it's worth a read. 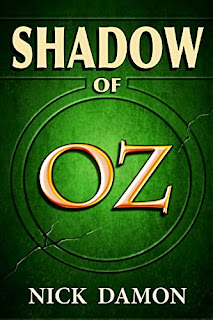