I seldom pay much attention to sports, but when a team from your alma mater wins the high school regional girls' basketball title ...

(By the way, alma mater means "nourishing mother" ... I didn't even know my mother played basketball.)

Wait, what? The Central Noble Lady Cougars basketball team not only won regional, but went to semi-state? That's very cool; even a nerd like me gets that.

(I should add that the cheerleaders were all very nice on those few occasions when we interacted; we just seldom interacted. I was what in those days was called shy, and these days would be called antisocial. Now I'm Facebook friends with most of them, one of those remarkable things about social media.)

I don't believe any CN sports team ever won semi-state. Again, I could be wrong on this. When I was in school Coach Schnepp took the boys' basketball team all the way to the regionals, I think. There were signs on the walls, and we had a pep rally, and I went to it; but I sat with a notebook on the back row, writing a science fiction story with lots of violence and sex. These days I'd have ended up in a therapist's office.

Anyway, my biggest memory of Coach Schnepp was that he taught Physical Education, and he taught by doing, and he did dodgeball. Now, Coach Schnepp had these long arms--he could touch his toes without bending over--and he played the sport we called "killer ball" right along with us. When he wound up and let go, pity the poor guy who didn't get out of the way in time. It would be like someone get shot in a 70s Eastwood cop movie: They'd fly halfway across the gym and tumble end over end. Sometimes the ball would stay in the shape of a disk from flattening against its victim. Sometimes we couldn't locate the ball at all. Once all we found was a hole in the concrete block wall, and a felled pine tree outside.

The Lady Cougars did what? They won State? They're the State Champions? Wait ...

They're the STATE CHAMPIONS!!!!

Holy crap. That's just ... awesome, and it explains the giant parade that went through town. I thought it was to celebrate the end of February.

It's not surprising, either. These girls are so good, colleges are afraid to recruit them for fear the rest of the team won't have anything to do.

They're so tough, Chuck Norris walks across the street to avoid them.

Muhammad Ali sent a message from the afterlife to say they're the Greatest.

They're so talented that during their downtime they won the regional championships in baseball, track, and chess. Their group science project is in the Smithsonian.

What I'm saying is, they're pretty darned good. They were called in to give lessons to the Duke Blue Devils. (It's a basketball team, I looked it up.)

You know, when we're looking to the future of our country and world, these are the kind of people who give me hope. Go-getters. Hard workers. 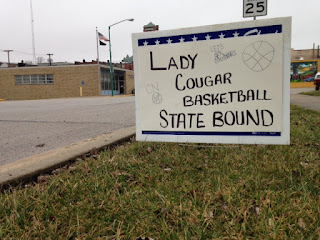