I thought this title was nicely official sounding and also just alliterative enough.

Anyway, the longest book signing in history, featuring two somewhat introverted people who are a bit averse to crowds and noise going to a festival, is over. By now you've all seen a photo of either me or Emily at the display table, which Emily laid out after telling me to go do something else. But here's a photo of the table with Emily and a guest who stopped by: My father, Delbert. They're munching on caramel corn at this moment, which we'll talk more about later. 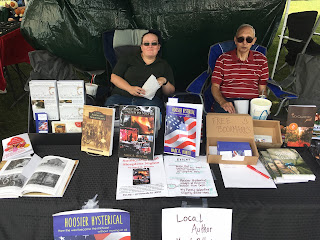