While walking back to the Spring Shelter at Pokagon State Park, I encountered my wife with a fella named Fred. Good thing too, because I would have made a wrong turn if she hadn't pointed the way, and the right way was still a half mile hike. Fred is the saddle barn's only mule: 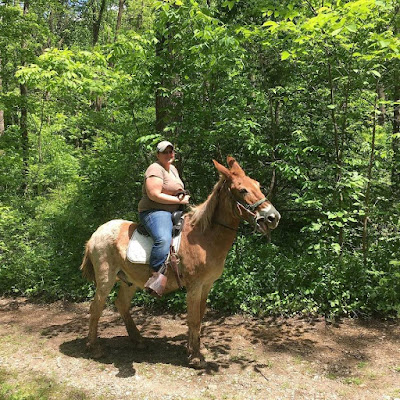 That photo posted on Instagram at the time, but for some reason Blogger has never updated its app, and it usually crashes when I try to post from my phone (although a previous post I thought didn't go actually posted twice).

I'd planned to work out of the car while she was on the job (I'm revising Beowulf: In Harm's Way). But it was a beautiful day, so I decided to walk the to the Spring Shelter even though I'd already hiked almost four miles earlier in the day. It's in a wooded area along the saddle trail and usually quiet, except for the people who go there with empty containers, for the spring water. They've quite literally piped it right out of the ground. 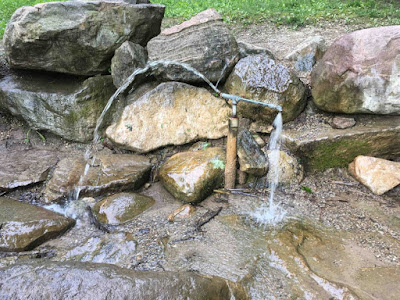 Since I was carrying a leather case with my laptop, iPad, and my ancient iPod, I checked the weather forecast first: No rain predicted. Then I looked at the weather radar: No rain in the region. So I got there, laid my stuff out, and was engrossed in revisions about an hour later when big drops started falling on the keyboard

Just a brief shower to remind me I'm not in charge. And, after all, the Spring Shelter includes ... wait for it ... a shelter. At least I could see the clouds that were the source of my torment; and when I checked the radar, sure enough, there were the showers popping up. Not like last week, where it started raining on my while I mowed the lawn -- despite the fact that there wasn't a single cloud overhead. 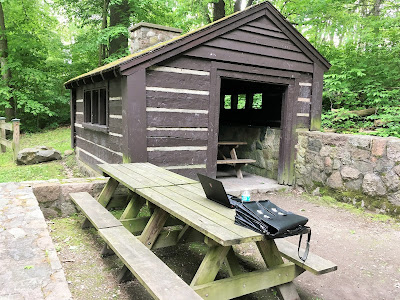 Just goes to show, there's no such thing as a perfect writing spot