A young woman moves from one state to another (with one of those states beginning with an M) and falls for a guy working in communications, who has a silly and sometimes inappropriate sense of humor.

Quick: Is it the plot of my newest novel, or the story of my life? Trick question--it's both!

Okay, it's a tenuous connection. (It's a real word, I looked it up.) The truth is, I wrote Radio Red before I met Emily. Granted, I'm always looking for a way to promote my books, but I think marrying someone just because she comes from Missouri, and my main character is going to Michigan, is a little much. (Still, the male protagonist and I do both talk on the radio for a living, so there's that.)

The other connection is one I didn't notice at all, until Emily pointed it out: My publisher, Torrid Books, scheduled the release of Radio Red for March 7; our wedding anniversary is March 5. Not an exact match, but still, the story's about a couple getting--you know--coupled. What better way to celebrate our marriage than with a romantic comedy?

I mean, other than a lobster dinner and wine.


Buy links for Radio Red (and other books):

Not to mention www.markrhunter.com, of course. 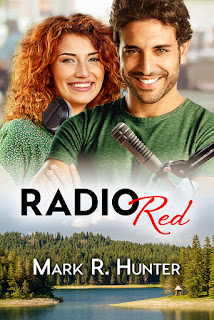 Radio Red:
Kirsten Veiss is setting a record for bad days: She’s broke, lost in rural Michigan, sunburned, and without transportation after her van hits a deer. When she hears a nearby radio personality making fun of the classical music she loves, it’s the last straw.
Aaron Debolt just wants to bring classical to a wider audience, and he thinks a shock jock approach might do it. But he’s shocked himself when a sunburned, wild-eyed redhead bursts into the radio station late at night, brandishing—a tailpipe.
Soon Aaron has his hands full in more ways than one, and Kirsten has a temporary on-air job under the name Radio Red. Now all they have to do is prove she’s not the one sabotaging the station’s operation.
Collapse