So here's the scenario: You want to support your local volunteer fire department, so you go to their fund-raising bingo night. And it's your lucky day! You get the B-12, and the I-C, and the IN-diana, and G-whiz, and even the O-boy! (I don't actually play Bingo, but I assume that's how it goes.)

"Bingo!" You've won! This is so much more fun than when you and your buddies got drunk and had that nose hair plucking contest!

And here's your prize. Powered by D-cell batteries, it's three speed, in brilliant white plastic--real plastic, not that fake stuff. You look at it, puzzled. Is this some kind of back massager? And then the realization hits you:

Well done, sir (um, or ma'am)! Your Valentine's Day gift-giving dilemma is over.

That's how they roll at the Hometown Volunteer Fire Company in Schuykill County, Pennsylvania. Their idea of "hometown" appears to be at odds with what I would imagine. But like any volunteer fire department, the Hometown Fire Company has the ongoing challenge of finding enough money to stay in operation. The good news is, they appear to have hit the jackpot, or rather the bingo: Naughty Bingo.

Hometown tried it for the first time last year, reasoning that their supporters were getting tired of all the old fundraising tropes. I mean, you can only have so many fish fries, pancake breakfasts, porkburger sales, chicken ... mmm, I'm hungry. Where were we?

Oh, yes. They decided to try something new, and it brought in a standing-room only crowd from several counties in two states. (New Jersey. Go figure.) Just 160 tickets were sold, and they were snapped up faster than a leopard-skin whip at a San Francisco clearance sale. Do they make leopard-skin whips? Wait, don't tell me.

The firefighters, already well known for finding 'em hot and leaving 'em wet, were understandably concerned about community reaction. But everyone seems to love the idea--maybe because it beat raising taxes. Really, with fund raisers it's already a small step from sex toys to bratwurst. "Now remember, this is silicone: Don't try to put it in a bun. Wait, let me rephrase that ..."

The real question people should be asking themselves is: Why should emergency responders have to spend enormous amounts of their time begging for it? Money, I mean? If there's one area that should be fully funded, this is it.

Maybe every government department should have to do fund raisers:

The parks department could set up a lingerie football league.

And, of course, the street department would have ... street walkers.

Until that time comes, it seems to be mostly small fire departments that need to get a stiff shot of cash by raising funds. If they have to do that, then I say let them do whatever gets their finances up--we've already had racy firefighter calendars of both sexes, so maybe this was the next logical step.

And if Naughty Bingo is here, then strip poker can't be far behind. I'd better start working out. 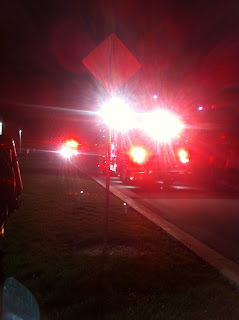