Traditionally I post my author appearance press releases here, and is this not a traditional time of the year? So here's what I sent out to various newspapers, radio stations, TV stations, and all the ships at sea, and it might even end up being used somewhere. If you want to use it--you're welcome to.

However, I would discourage you from starting up your own TV station for the sole purpose of displaying my press release on the screen. You'd be surprised at the initial investment, plus there's the whole part about actual programming.

December 11th will mark the 200th anniversary of the state of Indiana’s formation, and two Hoosier authors are celebrating a day early with an appearance in downtown Albion.
Mark R. Hunter’s newest book, written with his wife Emily, is all about Indiana, and created with the bicentennial in mind. Hoosier Hysterical: How the West Became the Midwest Without Moving At All, is a tongue-in-cheek look at Hoosier History, personalities, and trivia. The Hunters spent almost two years researching and touring the state, and the book is illustrated with photos they took on their travels.
The Hunters already collaborated on two local history books: Images of America: Albion and Noble County, and Smoky Days and Sleepless Nights: A Century or So With the Albion Fire Department. In addition, Mark Hunter has five other published books, four of them fictional works set in Indiana.
Mark and Emily will be appearing from 1-5 p.m. December 10th at the Noble Art Gallery, 100 E. Main Street, in Albion. The gallery holds the works of artist/owner Dan Gagen, as well as over twenty other area talents, and features items ranging from wall art to jewelry and pottery. They also have the books by the Hunters, who have visited twice before.
In addition, the event will serve to unveil Mark Hunter’s newest novel, which is scheduled to be published March 7, 2017 by Torrid books. Hunter hasn’t announced the book’s title, but its cover has been approved and will be on display at the appearance, along with all of his previous books.
Hoosier Hysterical and all the Hunters’ books can be found at http://markrhunter.com/, and on Amazon at http://www.amazon.com/Mark-R-Hunter/e/B0058CL6OO.
Mark R Hunter can also be found on Facebook at https://www.facebook.com/MarkRHunter/, and on Twitter at @MarkRHunter 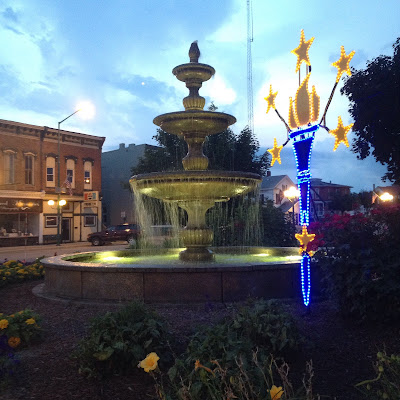