I miss summer already, and it’s still mostly summer out. Still, there’s one thing good thing about cold weather—no bugs. I’d really rather have insects than winter (spiders aren’t technically insects), but yeah, they do bug me.
Earlier this summer, while we were down in Missouri, we found this on the car windshield: 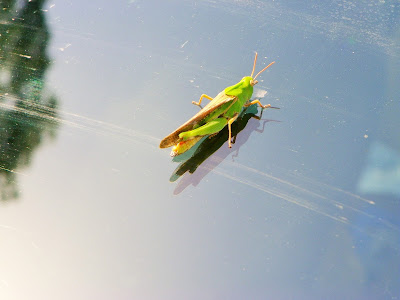 It’s a grasshopper, possibly mutated by radioactivity or fracking, because it’s bigger than the photo makes it appear. More the size of a Volkswagen bug. Maybe this view, from inside the car, will give you a better idea: 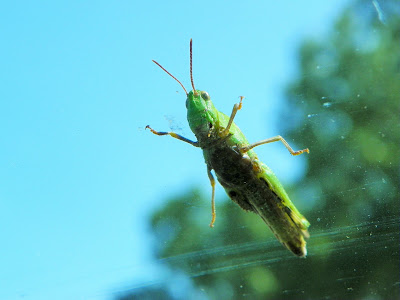 It’s monster movie giant! The bug that ate New York! Surely it got made into a 50s black and white SF thriller!
(The closest I could find was this: http://www.imdb.com/title/tt0050294/?ref_=fn_tt_tt_30. That’s The Deadly Mantis—which did indeed head down to eat New York—but instead of hopping grass, it prayed. I recall it scaring the bug juice out of me on The Double Creature Feature.)
On the one hand, I’m not at all scared of grasshoppers. On the other hand, if that thing landed on me before I saw what it was—assuming it didn’t weight me down so much I couldn’t move—I’d have rolled my car over to one side and uprooted the nearest tree in my eagerness to run out of my own skin.
Collapse