"If you really want to find out who your friends are, ask them to help you move."

I don't know who said that, but truer words were never spoken. However, you have to amend that statement when you're going to help your in-laws move. If you like your in-laws, as I do, the question is pretty much the same. If you don't, well ... it's like making a political statement on Facebook: You need to decide in advance how much grief you're willing to go through.

There's a twist in this particular tale. About two days after my in-laws closed on a house, the mobile home they were living in was hit by a car. No, the home wasn't mobile at the time. They say the driver hydroplaned—which I find odd because it wasn't raining at the time—then slid through a utility pole and turned the front bedroom into a drive-through. And isn't that the next big thing in mobile homes? First they can travel, now you can just drive into the bedroom and voila--combination garage! Leave the car in there when you move it, and save on gas mileage.

The result: They had to get moved a bit faster than planned. For one thing, the bedroom was now about the width of a bathtub. For another, it had huge holes in the former walls ... and this is southeast Missouri, where the mosquitos can punch through walls without the help. And finally, the electricity had to be cut off in the home. See above about southeast Missouri—in July.

It took six people total, averaging three or four at any one time, two days to make the move. They rented a truck, and that makes things way easier, although maybe we should have rented some people. About 50% of us had chronic back issues, but that wasn't as much an issue as the fact that it was southeast Missouri. In July.

See, here's the difference between that area and where I live, in northeast Indiana. Hoosier weather gets just as hot and humid ... from time to time. It seems like our heat waves last forever, but in reality they rarely go more than a few days. (Last week excepted.) Down there the humidity pops up to 114% in May, and the temperature doesn't drop below 90 until October. Yes, the humidity's actually more than 100%. It’s a head-scratcher, or maybe that’s the mosquitos.

Their winters are wonderful. I mean, compared to Indiana.

So that led to a few bumps along the way, such as my difficulty in seeing because the lenses on my glasses melted off. Going into that trailer was like sticking your head into the stove to see how the all-day Thanksgiving turkey is doing. Leaving the trailer was like going into the kitchen where the turkey's been cooking all day.

It was so hot they had to open the fire hydrants to let steam out.

It was so hot even the politicians stopped talking.

It was so hot we had to put the beverage coolers into cooler coolers.

None of this bothered the mosquitos a bit. The first day we soaked in bug spray, which actually cooled us down until later, when it started boiling off our skin. But I was wearing jeans at first, and when I got the bright idea to try shorts an hour later, I forgot to reapply. By the end of the day, my legs looked like an overhead photo of a heavily shelled World War I battleground. I couldn't get more bites touring a donut factory.

What I'm saying, basically, is that we didn't have much fun.

And yet, in the end, it was worth it. The in-laws have a nice little place now, and we visited with some friends, and once the moving part was over we even got to do some traveling. There's something to be said for helping people out. If I could, I'd go back down there and embrace the whole community with a great big, loving cloud of DDT.

It would still be hot, though. 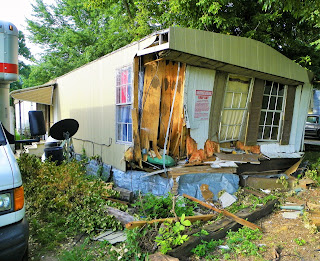