If you haven't caught it in a newspaper or maybe Time Magazine, here's the press release I sent out about the book signing this coming Saturday. Let me know what you think of it. (No, it wasn't in Time Magazine ... although I did send it out to about three dozen newspapers, radio and TV stations, and snake oil salesmen. You'd be surprised how hard it is to find a good snake oil salesman outside of Washington, D.C.)

As authors Mark and Emily Hunter promote their book about Noble County history, it was inevitable that they’d find their way back to an Albion location where they’ve already held two book signings—a building that also appears in their newest book.

The Black Building in downtown Albion can be glimpsed several times in Images of America: Albion and Noble County, a photo-filled history book that’s part of Arcadia Publishing’s popular Images of America series. The building is at the junction of State Routes 8 and 9 in Albion, a location once called “Black’s Corner”, across from the Noble County Courthouse and within feet of what was once the geographical center of Noble County.

Currently the Noble Art Gallery, the building held numerous businesses over the years before being purchased by Dan and Lori Gagen. The Gagens invited the Hunters for a third appearance on Saturday, October 3rd, from 1-5 p.m.

Mark and Emily were there before with copies of their other books, including a history of the Albion Fire Department, a humor collection, a young adult adventure, and Mark’s two romantic comedy novels. But Albion and Noble County has a direct connection to the Black Building. In fact, there’s also a photo in the book of the building that used to be in that location, which was also built by the Black family.

Owen Black arrived in Albion in 1856, and built a general merchandise store at Albion’s main intersection, Orange and Main Streets. When fire leveled the whole block in 1867 Black rebuilt, only to lose his dry goods business to another fire in 1879. Black persevered, this time building a fire-resistant three-story brick building, which has stood there for over 135 years. The Black family also stayed, operating several businesses in town and getting involved in local projects and organizations.

The Hunters appeared September 12th at Stone’s Tavern, another location mentioned in Albion and Noble County, during the Stone’s Trace Pioneer Festival. One of their two book signings on October 10th will be at Joanna’s Dealicious Treats, in historic downtown Kendallville. (The other is at the Cupbearer Café in Auburn.)

Albion and Noble County collects well over 200 images of towns, locations, and people in the area. The Hunters’ website is at www.markrhunter.com 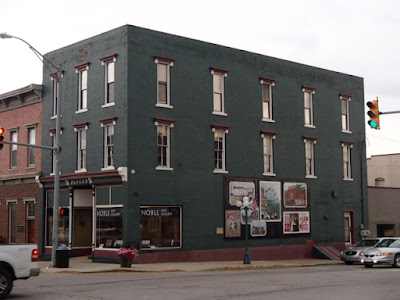