Joleene Naylor gave me this Blogger's Recognition Award, which is for recognition of bloggers, which I am one. This came as something of a surprise to me, as I never thought of myself as a blogger even though my blog is hosted by Blogger. 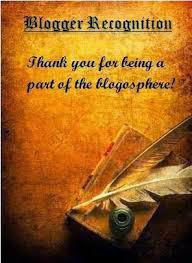 Joleene’s a great writer and a great person, even though there’s a spider on the front of her blog: https://ramblingsfromthedarkness.wordpress.com/

As you all know unless you’ve blocked me for going on about it, I have a new book coming out this month, so I’m late getting this out. But when someone takes the time to think about you … well, you’ve got to respond. The idea is to give a brief story on how your own blog got started, along with advice for new bloggers, and to provide a link to the giver’s blog, which—see above. Also, the original post comes from here: http://eveofnight.blogspot.co.nz/2014/10/lets-celebrate-whos-up-for-award.html?m=1

My blog story is indeed a story, which started not with a blog but a column. “Column” is a newspaper term, describing what today we’d call a blog. I started out with a humor column that was carried in some local newspapers, but didn’t appear online. (Yeah, it was that long ago.) So, to get it online, I got a LiveJournal account, which I still have. (Yeah, it was that long ago.)

So the idea was to get my weekly column on the web, which I suppose is where Joleene’s spider came from. But at about the same time I started writing fanfiction, and that ended up there, too. (Look for me under the name Ozma914, although I haven’t had time to write fanfic lately.)

Later I figured out how to post photos. Before you knew it I had a blog, which still goes under the name of my humor column: “Slightly Off the Mark”.

And what advice do I have for bloggers? It’s so cute that someone might think I know what I’m doing.

One of the things I hear often is that you should have a narrow focus, so you can build an audience, or readership, or duchy, or whatever the term is. If you’re a writer writing to writers, do a writing blog. If you’re writing for readers, also do a writing blog, but showcase instead of talk about. Or talk only about Super Soldier Sailor Moon, or politics (yuck!), or the emerald ash borer.

Good advice. I don’t do this.

My advice is that whatever you’re really interested in, that’s what you write about. If you have eclectic interests, then write eclectically, and maybe message me to explain what “eclectic” means. Just as my books are of different genres, so is my blog: I write about writing, astronomy, politics (yuck!), humor, pets, family, firefighting, and whatever causes me pain, such as all that stuff.

If you don’t like blogging, people will know. So in the end, my only good advice is to have fun and, if you want to have a lot of followers, don’t be dull.

As for my nominees, usually in cases like this I simply open it to everyone; especially since in this case most of the bloggers I follow most regularly have already been nominated, and it’s important to be regular. (I’m looking at you, Roger and Donna! I mean about already being nominated, not about being regular.)  So I’m only passing this on to a few, but it’s the chosen few: