I took this picture at a field fire we fought back on July 6th. Thought I'd throw this in because starting later this week I'm doing a two part feature article called "Anatomy of a Field Fire", giving an insider look at what goes on when we get a Big One like this. (Well, it's big for us!) I'll repost that feature here after it's run in the newspaper, but meanwhile here's a teaser photo and the original news article on the fire. 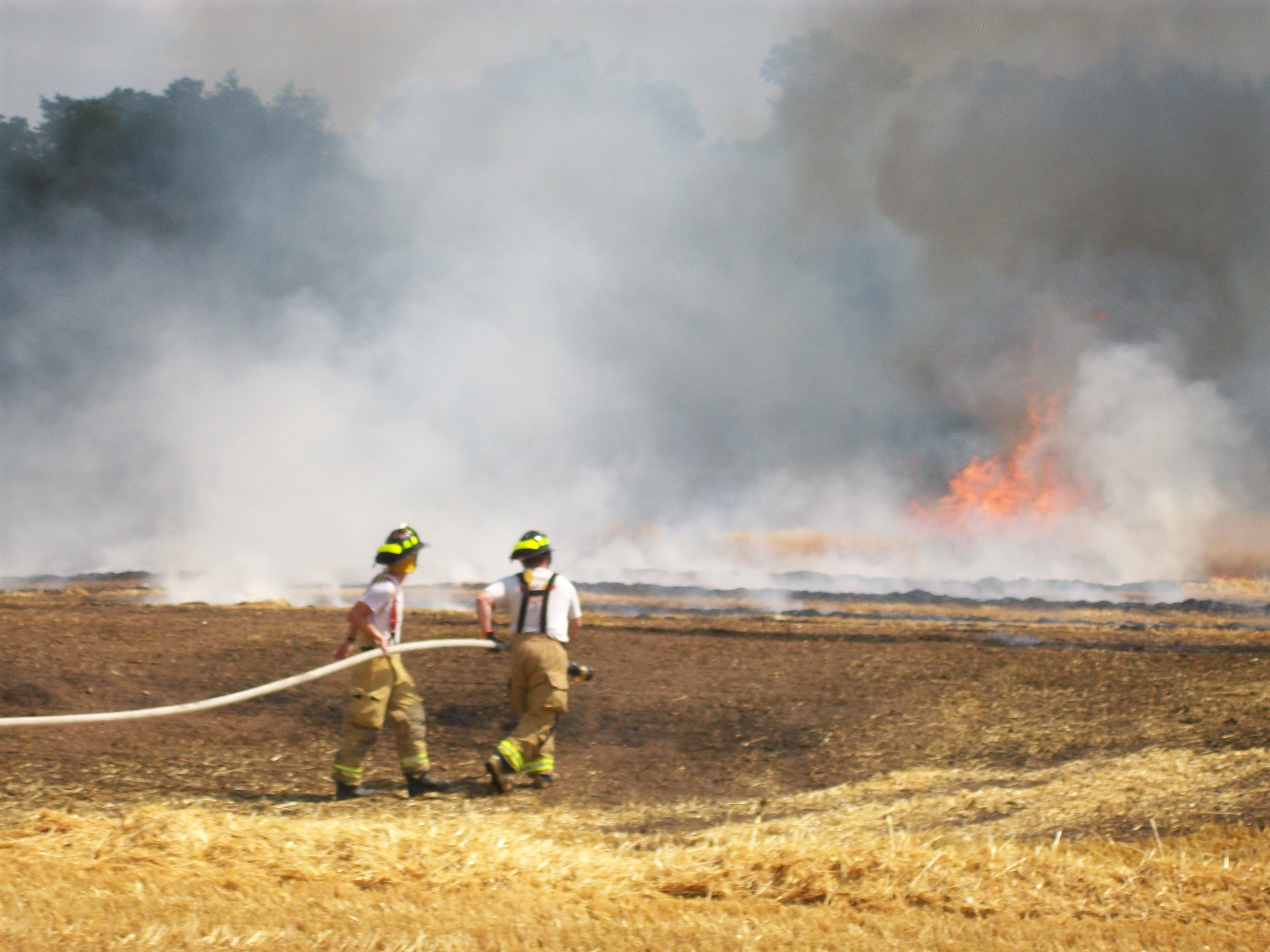 Five firefighters were hospitalized after spending Friday afternoon in triple digit heat, fighting a blaze that burned over a wheat field and damaged two buildings along CR 600 N, near Sacryder Lake.

Numerous firefighters were treated for heat exposure at the scene of the fire, which blackened about ten acres near 3388 E 600 N. The incident began at about 3:53 p.m., and although its cause remains under investigation, a combine being used in the field at the time could have caused a spark that started the fire.

Albion and Orange Township fire trucks were initially dispatched to the call, but when heavy smoke was seen as far away as Albion, firefighters quickly called for mutual aid. Six fire departments sent trucks to the scene. Extra manpower had to be called in because temperatures at the time hovered in the low 100's, quickly sapping the strength of responders wearing protective gear.

Flames leaped several feet in the air in the standing wheat, while the fire also burned through a drought-dried lawn to surround a home, pole barn, and an old bus parked on the property. Radiant heat curled up the home's siding and spread fire into the walls, forcing firefighters to work fast to keep the two story wood frame home from erupting into flames.

Minor damage resulted to the house and outbuilding and to several acres of wheat, in a field reportedly owned by Richard Bauman. The flames burned around a propane tank and the bus, but neither seemed to sustain serious damage.

Noble County EMS personnel treated several firefighters at the scene for heat exposure. Five were reportedly taken to Parkview-Noble Hospital for further treatment: Four for heat exhaustion, and one for a hand injury. Firefighters set up a folding dump tank, usually used to hold water for fighting rural structure fires, and personnel used it as a pool to cool off in.

The extreme weather heated up the pavement on 600 N so much that turning water tanker trucks damaged the roadway. Noble County Highway personnel were called in to make repairs, and to spread sand over the road's hot tar to prevent further damage and injuries. Noble County Sheriff's Department deputies also came to the scene, as the road had to be shut down between 400 E and 500 E because of the large number of emergency vehicles crowding the area.

It took over an hour to bring the blaze under control, and emergency units stayed on the scene until about 6:30 p.m. Fire units of the Albion, Orange Township, Avilla, Kendallville, LaOtto, and Ligonier fire departments responded to the scene, while Noble Township fire trucks provided standby coverage at the Albion fire station. Twenty-three Albion firefighters were among those who responded, manning seven units.

Albion and Orange Township fire units against responded to 600 N Sunday afternoon, when a grass fire was reported about two miles west of the first blaze, but the second was brought quickly under control.
Collapse