Getting a Leg Up On Knee Surgery

Well, it's been four days since Emily had knee surgery, I think ... I don't know, I haven't slept since then.

We thought we'd have about four weeks from the time everything was confirmed until the operation, so I made plans to get certain things done in a certain amount of time. Then they had a cancellation, and suddenly we had five days.

Emily had to have her ACL rebuilt. That's in the knee--I'd been telling everyone the ACLU was damaged, which caused some confusion. It turns out the ACL is actually the anterior cruciate ligament, and aren't we glad they shortened that? She also had a tear in the meniscus, which is also in the knee and not something you have with gravy.

We don't know for sure how she damaged her knee. Yes, it's possible all the hopping on and off horses at her job is connected, but sometimes it's the smallest thing. I once pulled a back muscle while hopping over a puddle, not that I'll ever admit it. 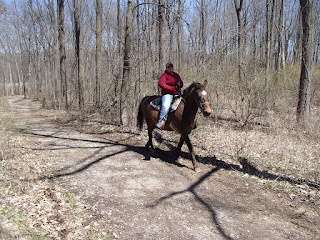 The surgery team got her all fixed up, held us there until we surrendered a major credit card (buy our books!), then sent us home--the same day. They scheduled physical therapy to start two days later, which seemed like a terrible idea and afterward still seems like a terrible idea.

The out-patient thing sounded great. Who wants to be in the hospital longer than they have to? Of course, it also means someone at home had to do the stuff hospital staffs used to do, and why is everyone looking at me?

I'm doing--eh--okay, as a nurse. At least I did once we got her up the steps and inside the house, which required the help of two police officers, one friend, and a husband with a bad back. The friend then prepared a meal for Emily, who hadn't eaten in many hours, and me, who had no excuse.

A few other details of the week:

We did stock up on foods I could prepare (e.g., with instructions of five lines or less). My areas of cooking expertise include homemade popcorn; egg sandwiches; and microwaves. She has, thus far, not starved.

Thigh-high stockings can be sexy. Compression stockings are not. Now that I've helped put a pair on, I understand why pantyhose are going out of style.

It took only a few times of lecturing the dog and then having to shove him out of the way before he realized the appearance of a four-legged Emily means he needs to go lay on his bed until we pass. 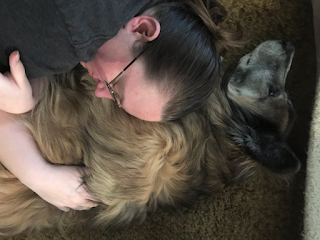 On a related note, he likes to check up on his humans, and having them sleep in two different rooms drove him crazy. He finally settled on laying in one room, by the doorway to the other.

Our biggest challenge was utilizing the bathroom. Our house was built without plumbing, and eventually someone carved a corner out of the kitchen to make a bathroom. You can literally stand in the middle of it and touch three walls--four, if you lean over the bathtub. The door opens inward, and with it open it's impossible for someone with crutches to get inside at all, let alone reach the toilet.

So I removed the door.

Not as impressive as it sounds--I learned in basic firefighting class how to take a door off its hinges. The dog was very confused, but I didn't think anything of it until the first time I had to go to the bathroom. I felt like I was sitting in a porta-potty with no door on it.

So, that's how our week has gone. The physical therapist/torturer seems to think Emily's doing well, and now that the spinal block has worn off she's getting around. I just changed the dressing, which took five minutes, and helped her get the compression stockings on, which took two hours. We're recovering from that, then I'm going to cook her a great meal. Oh, wait--we're out of frozen pizza.