The Newsletter Travels to the Past, and Hoosiers Are Still Hysterical

It was ten years ago this summer when my first novel, Storm Chaser, was published. Almost exactly a year before that I received the publishing offer, an event I envisioned as going very differently than it did. I told that story in our latest newsletter:

Don't forget to subscribe, and in return I'll try to be entertaining. And no, I don't sell my e-mail list to anyone, although I suppose the NSA already has it.

Meanwhile, since then we've (Emily is invaluable) had ten more works published. One of them is Hoosier Hysterical: How the West Became the Midwest Without Moving At All. I'm highlighting it because today it appears on the Fussy Librarian website, which you'll find at https://www.thefussylibrarian.com/

You can get it at the same price on the website or Amazon (it's illustrated and everything!) at just $2.99 as an e-book and $10.00 in paperback. You could even hand me the cash and I'll hand you a book--I won't tell.

It's a little silly, but I like to see how many I can sell in a short period of time. I have a theory that if you sell two books on Amazon within an hour, you'll end up in the top ten, and selling ten in that time gives you the ability to brag about being a best seller. Nobody really understands their algorithm, so why not?

If you choose to accept that experiment, the link is here:

Or, as usual, you can buy it direct from us here:

It's well know, of course, that Hoosier Hysterical is among the top ten humorous Indiana history and trivia books ever written, so far this decade. And to prove it, below the obligatory cover posting is a new excerpt from the book, one which I assume is quite funny. Although as I write this I haven't picked it out, yet, so I could be wrong. 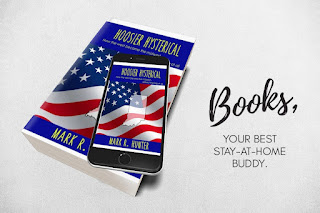 Three states can lay claim to Abraham Lincoln. You could say he was born in Kentucky, grew up in Indiana, and did all his adult stuff as an Illinois resident.

Well, you can say it if you want—who am I to stop you? It’s a free country, partially thanks to Abe.

A lot of the stuff you hear about Abe Lincoln is, surprisingly, true. His family got to America in 1637, and Thomas Lincoln’s father, the original Abraham, moved his family to Kentucky in 1782. So it took them almost 150 years to reach the Bluegrass State and produce little Abe, but hey—travel took longer back then.

Unfortunately, four years after they arrived Grandpa Abe Lincoln was killed by American Indians, because, after all, he stepped on their proverbial lawn. But Thomas grew up, married Nancy Hanks, and bought a farm near Hodgenville. Hodgenville is south of Louisville along the Lincoln Parkway, although it’s safe to assume the highway didn’t exist at the time.

Just like in the stories, Abraham Lincoln was born in a one-room log cabin, and later attended school in a log schoolhouse. They laid a lot of logs back then.

In 1816—the same year Indiana became a state—the Lincoln family crossed the Ohio River and settled in Indiana. Abe was six, so we Hoosiers can claim some of his formative years.

And formative they were. At age seven he shot a wild turkey, which upset him so much he never hunted again. It was February, after all, and with no way to keep the turkey until next Thanksgiving, it was wasted.

The next year he got kicked in the head by a horse, and for a time everyone thought he was dead. Personally, that would have put me back on to shooting animals. That same year his mother did die, permanently, from a medical condition called milk sickness.

Like Lincoln, milk sickness was uniquely American—this is the only continent it happened on. It came when cows ate a plant called white snakeroot, and wouldn’t you think the name alone would keep the cows away from it? That’s why learning to read is so important. Today milk sickness is almost unheard of, so we use fast cars to control the population.

Lincoln didn’t attend school much, but he developed a love for reading and would borrow books whenever he could. This was because they had no electricity for his PlayStation. You can’t power a videogame console with candles, but you can sure as heck read by them.

He also got to travel a bit, something many people never did. In 1828 he helped crew a flatboat down the Mississippi, and got his first taste of slavery when he saw a slave auction in progress. During the same trip seven black men tried to rob the flatboat, which could be called ironic. After he fought them off Lincoln didn’t hold a grudge.

Then, in 1830, the Lincoln family moved 200 miles, into Illinois. Abraham Lincoln was never heard from again.

Okay, not really. In fact, that same year Lincoln made his first speech, which urged navigation improvements on the Sangamon River, near Decatur. Over the next several years he read, enlisted in the military, read, ran a business into the ground, read, became a postmaster, got elected to the state legislature, and realized he’d read so much he could start studying law.

So it all worked out pretty well for him.

Okay, there were bumps along the way. He had bouts of depression, lost an election, was unlucky in love, and almost got into a sword duel. All because he left Indiana, so let that be a lesson to you.

In 1900 Lincoln’s son, Todd, gave $1,000 to take care of his grandmother’s Indiana grave. Spencer County officials gave another $800, and bought 16 acres around the gravesite. That place is now the Lincoln Boyhood National Memorial. I understand there’s also a monument for Abe in Washington. 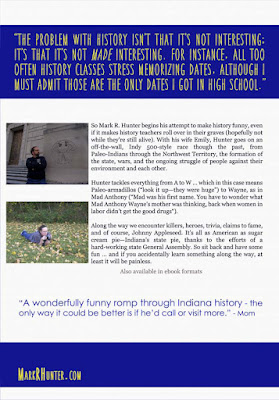