Some books just shout out for me to read them. In this case, my main attraction to Putting Out Old Flames was the number of parallels between it and my own first novel, Storm Chaser. Both have male protagonists named Chance who are also firefighters (although mine is a volunteer); both have characters who, like me, are emergency dispatchers; both are set in small Midwest towns (mine in northern Indiana, this one in Michigan). They even both climax with a desperate car ride.

Both are also romances (mine's a romantic comedy). It's a good thing to keep in mind, because no matter how good Putting Out Old Flames is--and it is good--it remains in the romance genre. If you don't like romances and are determined to remain a non-fan, then this obviously isn't for you. If you do, then follow the link for the requisite quirky characters and steamy sex scenes. 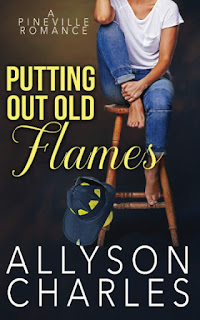 Jane Willoughby is our heroine, 911 dispatcher and confirmed single since her high school boyfriend broke up with her--via greeting card. Novelty greeting card. Jane has been put in charge of organizing a charity fireman's ball, and she discovers the hard way that her partner in the job is Pineville's new Assistant Fire Chief, Chance McGovern, who doesn't really seem all that sorry for the horrible way they parted.

The old attraction is there, but Jane is still, and justifiably, angry with her former lover. Chance has just survived a rocky divorce, and is trying to find some stability for himself and his four year old son. They're both older and wiser, and the town is actively rooting for them. But she needs to learn to forgive, and he needs to apologize--a LOT. Of course, complications ensue, among them Chance's ex-wife and sister, and Jane's rule-breaking hippie mother. 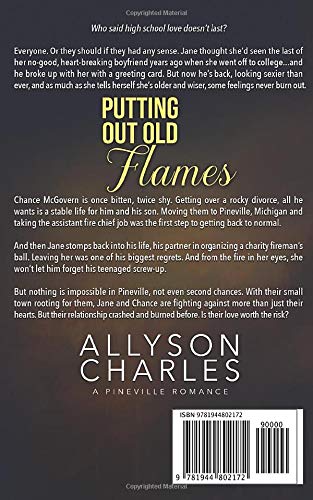 It's a fun story, if sometimes frustrating (Apologize, already!), and worth the read. For those wondering, Allyson doesn't make any major mistakes in her portrayal of 911 dispatcher or firefighters, and for that I'm thankful. Jane doesn't seem as stressed as I am on the job, though.

(I received this book as an Advanced Reading Copy, in exchange for an honest review. Believe me, if I didn't like it--you'd know!)