I'm In a Horticultural Wasteland

I have a philosophical question.

Okay, not a heavily philosophical question. On some days, I can't even pronounce philosophical. Sometimes I can't get past "phil". Besides, it's actually more of a horticultural question.

Two lilac bushes have grown behind our house since I bought the property, some thirty years ago--and they weren't young then. I love the scent of lilacs, and seeing them bloom is another sign that winter is over. 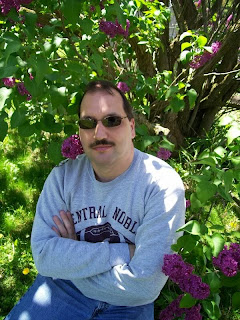 You have to look behind me to see the ... okay, I couldn't find an old photo on my computer, and I'm too lazy to go looking. Anyway, you can see they were pretty healthy bushes, verging on trees. But now? Now they're older, and I've been pruning off dead branches for years. Despite that, I didn't notice until a couple of years ago that different bushes and trees were growing up among them, no doubt planted by various birds and small animals in the course of them, um, relieving themselves. Last fall I finally went through and (I thought) trimmed out everything that wasn't lilac, leaving a handful of sickly leftovers that I hoped would come back strong.

This spring something did indeed come back strong, but it wasn't the lilacs. I'd completely missed two trees that were growing up among the lilac bushes. I took this photo of them in poor light, then tried to correct the photos in an equally poor way, but this gives you an idea of what they were like when they blossomed: 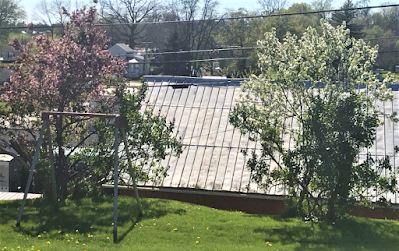 The darker foliage you see below them are the original lilac bushes, which bloomed at about the same time. They're greatly reduced but still going, as is the small white lilac bush we planted further to the right a few years ago.

But one of them has to go.

So here's my question to you, the plant experts/amateur/armchair growy-persons. Which ones should go? I'd rather have the lilacs, honestly, but those other trees are bigger at this point (and too big to transplant). Should I give up on the lilacs? Or try to transplant some of them? Heck, for all I know those new trees are invasive, or poisonous, or dropped here by Martians to take over Earth plants. Any opinions?

Don't be afraid to upset me: My bark is worse than my bite. (Get it? Never mind.)