Some novels dive right into the action; some try to get you interested in the characters and their world first; and the best ones try to accomplish both right from the get-go.
Scavenger Hunt, by Dani Lamia, is a slow burn, so slow I was convinced I was reading a literary novel at first. (Literary novel definition: No plot, no fun, and everyone dies in the end.) And yet, despite the fact that I'm a vocal hater of literary novels, Scavenger Hunt managed to draw me in to the story of Caitlin Nylo, a rich kid who, as the novel opens, comes home to find her mother has committed suicide.
See? No fun.
Jump forward to present day, when Caitlin is divorced, second in command of her eccentric father's toy and gaming company, and unwilling wrangler of her four dysfunctional siblings. Lamia puts a lot of words into describing the world of Caitlin and her family's world, and despite myself I was drawn in. The first twist comes when her father passes away, and Caitlin is enraged to discover his multi-billion dollar inheritance--including control of the company--will go not to his number one daughter, but to whichever brother or sister manages to win an elaborate scavenger hunt.
After that, the twists start coming so fast that I had to put pain cream on my neck. The competition exposes old injuries and sibling rivalries, and that's before the game becomes deadly. 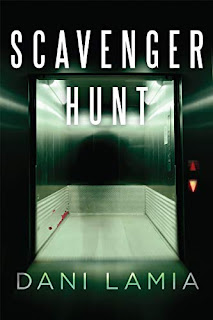 https://www.amazon.com/Scavenger-Hunt-Dani-Lamia-ebook/dp/B085HKPSY1
Have you ever read one of those books that was good, then had a final twist that made it great? When I got to the end of the second to last chapter I had to stand up and walk around the room, yelling and shaking my head. My co-workers weren't amused.
Otherwise I'm still of mixed feelings, because I wanted so badly to dislike a setup that took a third of the book, but I just couldn't. Lamia drew me in with Caitlin's damaged, cynical outlook on life, as well as vivid descriptions of the other characters and their world. It drew me all the way to the scavenger hunt, which went nothing at all like the characters, or I, could have expected. Literary novel? Maybe literary mystery would be a better description.
You probably won't finish this book with a smile on your face--but you won't forget it easily, either.
http://markrhunter.com/
https://www.amazon.com/-/e/B0058CL6OO
https://www.barnesandnoble.com/s/"Mark R Hunter"
Tags: amazon, authors, book review, book reviews, books, mystery, novels, reading, review, reviews
Subscribe