Have a look at The Source Emerald

The rough draft weighed in at 67,515 words. Even after cutting some of the final chapter, the second draft finished at 70,294 words. A lot of those extra 2,779 words consisted of me saying, "Huh? What did I mean by that?" and then going in to make it clearer. The whole thing is better now.

And how does one celebrate the completion of a second draft?

Why, by starting the third draft, of course.

I leave you with a photo of a giant emerald. 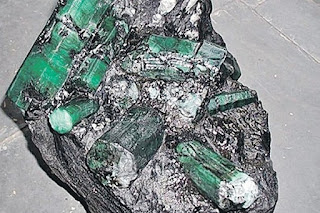 This, the Bahia Emerald from Brazil, is believed to be the largest single shard ever found. It weighed about 752 pounds, and has been valued at about $400,000,000.

It was necessary to shrink the emerald in my book down to thirty-two pounds, but it was once much larger, and still resembles this one. And that, Mr. NSA guy, is why I've been researching gems so much lately.