Her name was Virginia O’Hanlon. She graduated from Hunter College (gotta love that name) with a Bachelor of Arts degree, and a year later received her Master’s from Columbia. In 1912 she began teaching for the New York City school system, and 47 years later, after reaching the position of principal, she retired. It was a full and good life, one in which she had an impact on many children.

But throughout her life, until she died in 1971, she received letters, questions and interviews about something she, herself, did as a child -- something that has become immortal.

She wrote a letter.

“Quite naturally I believed in Santa Claus,” Virginia said years later, “for he had never disappointed me. But when less fortunate little boys and girls said there wasn’t any Santa Claus, I was filled with doubts. I asked my father, and he was a little evasive on the subject.”

All we fathers have been there.

“It was a habit in our family,” Virginia continued, “that whenever any doubts came up as to how to pronounce a word, or some question of historical fact was in doubt, we wrote the Question and Answer column in The Sun. Father would always say, ‘If you see it in the Sun, it’s so’, and that settled the matter.”

This was in 1897. Anyone who said “If you see it in the newspaper, it’s so” these days would be laughed right out of the room, but we were a more faithful society then. So, Virginia wrote this letter:


“I am 8 years old. Some of my little friends say there is no Santa Claus. Papa says, ‘if you see it in The Sun, it’s so.’ Please tell me the truth, is there a Santa Claus?”


Those of you who no longer trust the newspapers would not be surprised if an editor quickly jotted down “Of course there is!” to satisfy the youngster, and leave it at that. But the letter found its way to Editor Francis P. Church, the son of a Baptist minister, who had two decades experience in the newspaper business.

Church was habitually given the controversial subjects to editorialize on, especially those involving religion. His motto was, “Clear your mind of can’t”. In other words, don’t try -- do. He felt he had to find an answer, and he had to answer truthfully. But if he said no, he would devastate the 8 year olds of New York City. If he said yes, how could he face his church, and all those adult readers who believed in his honesty?

It must have been terribly difficult, but he sat down to work on what would become the most famous editorial in history. It was reprinted annually, until the newspaper went out of business in 1949, and has become legend since.

In a probably misguided attempt to make Church’s reply clear to modern children, I’m going to try to update the editorial in today’s much poorer English. It’s probably a huge mistake, and I’m quite sure I’m not going to do justice to it. But the 8 year old Virginia’s of today are growing up too fast, and those of us with young hearts also need to remember Church’s conclusion:


Virginia, your little friends are wrong. They live at a time when they think no one believes in anything, and they believe only what they see. They think nothing is real if they can’t picture it in their little minds.

But all minds are little, Virginia, whether they belong to adults or children. In this huge universe man is very small, and his mind can’t truly understand all the things that are real and true in it.

Yes, Virginia, there is a Santa Claus.

He’s real, as real as love, and kindness, and the spirit of giving, and all those things that bring beauty and joy to the world. How terrible this world would be without Santa Claus! It would be as dull and sad as if there were no Virginia's. There would be no childlike faith then, no imagination, no love that makes this life worth living. We would be unable to enjoy anything we couldn’t see or touch. There would be no childhood -- and the light of childhood fills the world.

Not believe in Santa Claus! Why, you might as well not believe in angels. You could get your father to hire people to watch all the chimneys on Christmas Eve, but even if none of them saw Santa Claus coming down, what would that prove? Nobody sees Santa Claus then, but that doesn’t mean he’s not real. The most real things in the world are the things children and adults can’t see. Did you ever see fairies dancing on the lawn? Of course not, but that’s not proof they aren’t there. No one can imagine all the wonderful things that nobody can see in the world.

You can tear apart a toy to see what makes it work inside, but there’s a covering over those unseen things that not even the strongest man, not even all the strongest men together, could ever tear apart. Only faith, and imagination, and love, can push aside that covering and show all the wonderful things that are there. Are they all real? Oh, Virginia, in all this world there is nothing else as real and long lasting.

No Santa Claus? Thank God he lives, and lives forever. A thousand years from now -- a million years from now -- he will still be real, and make glad the hearts of every Virginia, and everyone who stays young at heart. 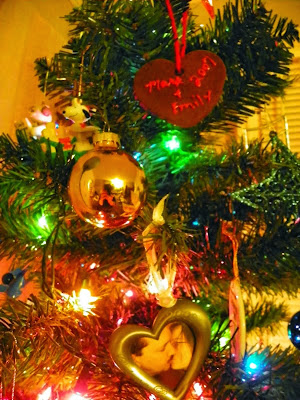