More Slightly Off the Mark is out in print ... still

Well, this is embarrassing: I'd meant to post this before the blog I put up on the same subject back on 12/2. It's been sitting in my draft folder ever since More Slightly Off the Mark was originally released earlier this year; from a promotion standpoint, the book seems to have been cursed.

But I'm still putting this out here, for three reasons: First, it's already written. Second, hey--still Christmas shopping season, and I always hope to be shopped. Third, social media doesn't seem to want other people to see what you're doing these days, so there's every chance you might not have read the previous post, anyway.

You probably already guessed this from my previous post. Still, now that we finally have the print version of our newest book, More Slightly Off the Mark: Why I Hate Cats, and Other Lies, available to buy, I can finally announce:

The print version of our newest book, More Slightly Off the Mark: Why I Hate Cats, and Other Lies, is available to buy!

It was what we call a slow rollout, which is another way of saying I wasn't as prepared as I thought I was, and I didn't take into consideration that great leveler of plans, Winter. This winter leveled a lot of us. (So did spring and summer, as it turns out.)

But now it's out, and only $7.50 for the paperback version, despite the fact that it's actually longer than the original Slightly Off the Mark. Or maybe because--all those words can be intimidating. Now, according to my calculations, you can have it for only 33 cents a page.

I might be wrong on that: I became a writer to avoid math.

Meanwhile, we've reduced the Kindle price of More Slightly Off the Mark to just $1.99, for those of you who have an e-reader, or a computer, and/or are just plain cheap. Remember, that's less than it costs to buy one of those super sized candy bars--and books have no cholesterol, yet still provide plenty of fiber.

And to further celebrate, we dropped the price of the original Slightly Off the Mark: The Unpublished Columns to 99 cents, which is what they charge if you want a plastic straw at Starbucks. It's true, I saw it the internet.

Plus you can read the preview and get it any time on Amazon: 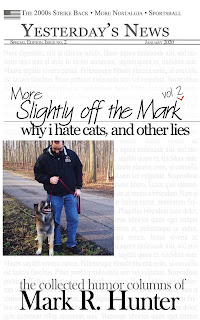 Remember, every time you don't buy a book, a reality TV show is born. Save our brains.