When I was a teen I didn't exactly have the happiest home life. As a result, and being an insatiable reader, I spent as much time as I could at the Noble County Library. It was only about a four block walk from our house, and from the library's front windows was a great view of the Noble County Courthouse. It was very much my home away from home for several years. 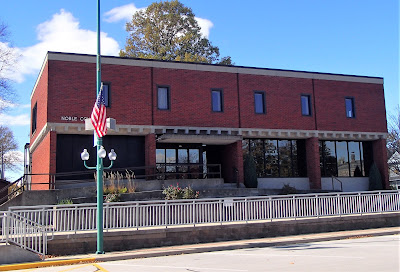 Well, the building is gone. The library moved in 1995, to a place that's a lot easier to navigate for both patrons and employees. About 35 years ago a member of the Library Board took me to the basement of the oldest part of the old library, and showed me cracks spreading through the concrete. He told me the original library was designed to have shelves around the exterior walls, with a central circulation desk. Now, with shelves all across the rooms, it held more weight then it was designed for. 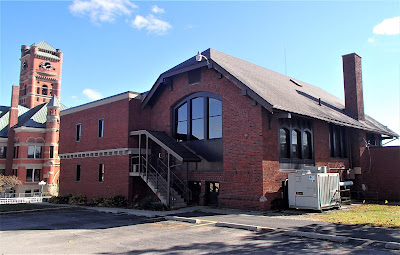 Not to mention it was too small, and laid out in three different levels. When the library moved, the Noble County Prosecutor's Office took up the space, but to me it will always be a library. Well, would. Now I have a brick.

I spent hours going through old books and microfilms there, researching our book Smoky Days and Sleepless Nights: A Century or So With the Albion Fire Department. Then I returned the favor, putting the library itself into Images of America: Albion and Noble County. Between them, I fed both my reading habit and my writing ambitions with volume after volume from the place.

In the photo above you can see the original structure in back, and the 1968 addition in front. The original, built in 1917, was thanks to a $10,000 Carnegie Foundation grant--Andrew Carnegie's money built a lot of early libraries.

In the photo below, which I got from the Old Jail Museum--on the same block--is the Carnegie Library before the addition went up. 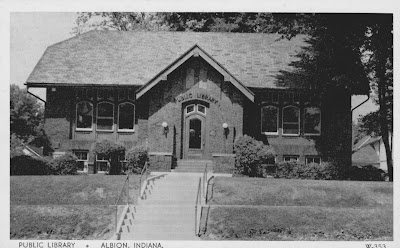 In elementary school my favorite part of the week was when the bookmobile showed up and we would file through, picking out something to read. The bookmobile also came from the Noble County Public Library, which had a garage built on the back to house it. 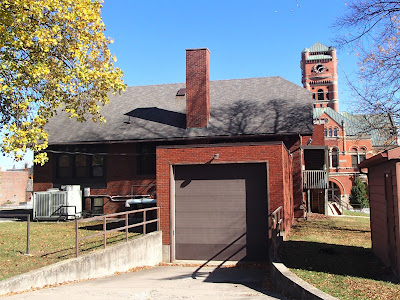 Just for the heck of it here's one of the bookmobiles, in a photo given to me by Ellen McBride. This one, I assume, was before my time--I recall the one we went to being more like a large van. 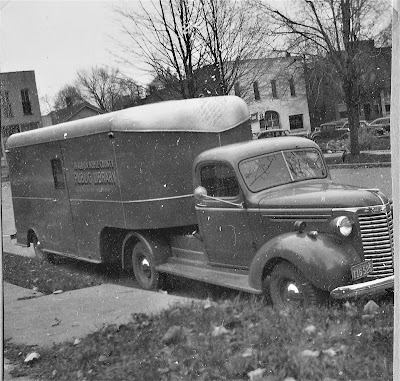 Anyway, the Noble County Library is still operating with three branches, and going strong. The original is being replaced by a Noble County Government building. I can't deny the practicality of most government offices being centralized into two buildings, with the resulting savings in utilities, upkeep, and communications. I might even end up working there myself, if my writing career doesn't allow me to retire by then.

But I'm gonna miss what was there.