You want a great book to give this holiday season?

Okay, yeah, my books, but this one isn't about self-promotion. I'm talking about a book Emily got me, one of my favorite gifts: The Annotated Wizard of Oz. 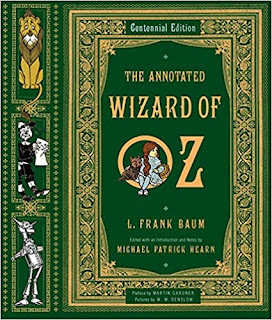 For those of you who think the whole thing began at MGM in 1939, "centennial edition" means it came out in 2000--exactly one hundred years after "The Wonderful Wizard of Oz" was originally published. There were actually two other "Wizard of Oz" movies before Judy Garland danced down the Yellow Brick Road.

Naturally the story is by L. Frank Baum, who in his relatively short life wrote 14 novels about Oz, in addition to 41 other novels, 83 short stories, over 200 poems, and at least 42 stage and movie scripts. Most of this was in a period of about twenty years.

But much of the writing in this volume is by Michael Patrick Hearn, who did a deep dive into Baum's  life and works. Hearn has earned his bona fides, and is an expert on both Baum and children's literature in general--he's written other annotations, and I can't imagine how much time it takes to track down so much information.

We know the story, of course, and it's printed here along with the original illustrations, in their original color. Little Dorothy (she doesn't get a last name until a later book) gets swept up in a tornado to the magical Land of Oz, where she gets a little help from her friends in reaching the Emerald City. The Great and Powerful Oz (who for some reason needs a kid to do his job) sends her to Winkie country, where--spoiler alert!--she takes out the witch, returns to the Emerald City, exposes Oz as a humbug, and loses out on her chance to get back to Kansas.

Dorothy and her friends then embark on an entirely different journey, absent from the MGM movie, to reach Glinda the Good and discover she would have saved a lot of walking if those darn silver (!) slippers had only come with an instruction manual. 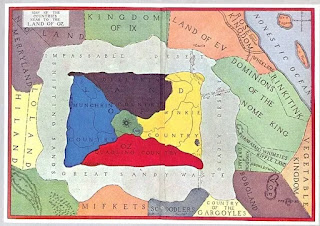 Hearn covers a lot about the book, including how it does and doesn't relate to real world happenings, and about Baum himself--both the good and the bad. He also touches on the other Oz books and Baum's entire volume of work, how his childhood led up to Baum's writing career, and his travels with his family. (It turns out "Kansas" was mostly based on a drought-stricken South Dakota.)

Of particular interest is the Baum family relocation to the little, orange-grove dominated village of Hollywood, where Baum became an early leader of the burgeoning film industry. Like most businesses he got involved with, the Oz Film Manufacturing Company had a rocky life.

"The Annotated Wizard of Oz" would be worth the cost just for the illustrations, from both the book itself and other works by Baum and his co-creators. As for me, I'm in the middle of writing a novel in which Lyman Frank Baum has a part, and the background info was not only fascinating, but helped me get inside his head in ways just reading the stories couldn't. If you're a fan of Oz or literature, this book would be of interest. If you're not a fan of Oz, I'm puzzled but I forgive you.