I wrote this a few weeks ago, and held onto it to cheer me up on those first cold, windy days of autumn. Oh, there they are. If you walk this trail now, I'd imagine you'll be treated to some amazing fall colors.

I joke with the title, because there's no such thing as a "standard" national park. Still, the first trail we hit on our first visit to Indiana Dunes National Park struck me as being a more or less normal Indiana trail. Woods, gullies, a little river, boardwalk over the swamp--that's Indiana, all over. (You can click on the photos to make them larger.) 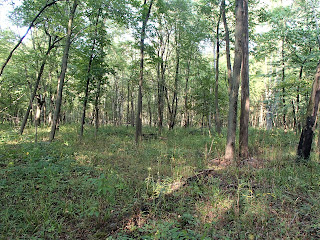 We were only a short distance from the dunes, and from Lake Michigan, where no doubt more spectacular views could be found. Certainly this trail wasn't as up and down as Turkey Run State Park, or Brown County, or Clifty Falls State Park way down south. But there's something to be said for just a normal, quiet walk in the woods. 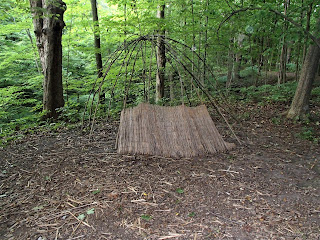 This is assuming you don't find some creepy half-completed Blair Witch Project-like structure in the middle of nowhere. Luckily I'd already done my research: This was someone teaching how the local Native Americans used to make their domiciles. So we continued on our very short hike.

Except, of course, that we took a wrong turn. Instead of hiking the mile and a half we intended, we went for three and a half miles. Believe me when I say that by the time we got to the end, we were very happy that there weren't too many ups and downs this time around. 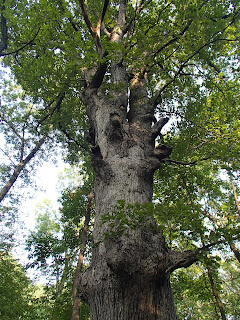 Many places in Indiana that are now parks and nature preserves were once settlements or farms, so it's not unusual to see a few big, old trees surrounded by a bunch of younger trees that just started growing within the last few decades. In my novel Storm Chaser I described a meadow at Chain O' Lakes State Park that doesn't exist anymore--it's a woods. So it was here, but we saw some trees like this one that were gnarly and huge and crazy old.

It was an overcast day, so the pictures didn't pop as well as I'd hoped they would, but they still give a sense of the place, I think. The funny thing is that we were just a short drive from the sprawling Chicago metropolitan area, and from the edge of Lake Michigan you can see the city's high-rises across the water. 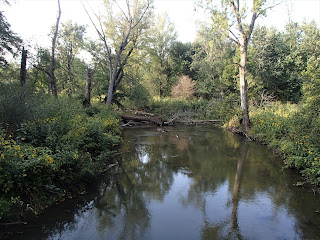 We crossed the Little Calumet River twice. I'd hate to have been canoeing here--there were lots of dead trees fallen into the water, and it would mean a lot of portaging around them. Apparently such blockages are called strainers, which I didn't know, and can be very dangerous, which I did. 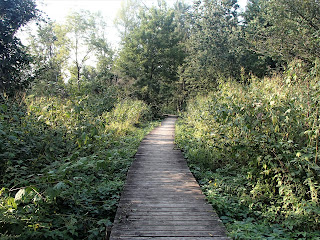 Ah, but we walked, Three and a half miles we walked, around gullies and over the river and through the woods and--wasn't that a song? We also hit a boardwalk across an area that would ordinarily be swampy, but in our drier weather was just mushy. I love boardwalks, and we've followed them through many Indiana parks and preserves. Why do I like them? No idea.

We're hoping to get back to the National Park when the leaves are turning, and maybe get you some dune and lake pictures. Stay tuned.