Well, shoot ... disregard. The price shot back up to normal while I was in the middle of spreading the word all over the internet, so I just look like an idiot. I suspected it was a mistake, but I'd hoped some readers would be able to take advantage of it. Instead I have egg on my face.

Amazon has the hardcover edition of Images of America: Albion and Noble County set at only $10, which is a heck of a bargain. I don't know why it's six bucks less than the paperback version--in fact, it's so low for a hardcover that I honestly wonder if they made a mistake.

But it would be a great Christmas present, and rumor has it we're going to take a shot at doing the holidays this year. If you do give it as a present, you can say you got it at full price--we won't tell.

https://www.amazon.com/Albion-Noble-County.../dp/1531671551
(And of course our other books also remain available. Gotta ramp up for the holidays!) 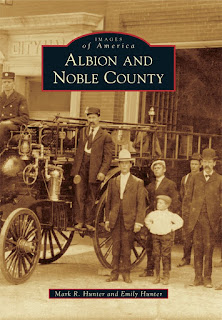