Backed by that knowledge, they formed a band that became insanely popular ... but as time went on the Song didn't come, and as Bill and Ted Face the Music opens, they're slacker dads reduced to playing at nursing homes and open mic nights.

Which, naturally, sets the entire universe to unraveling.

So Bill and Ted try to solve the problem the easy way. Experienced time travelers, they'll simply travel to the future, and take the already written Song from the future Bill and Ted. Excellent! Meanwhile their daughters, Thea and Billie, take matters into their own hands by traveling to the past, to collect famous musicians into a backup band for their fathers. 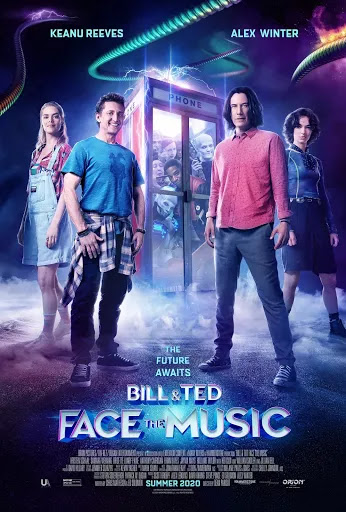 Bill and Ted Face the Music is exactly what we need in these times--pure fun. If you hate time travel stories, or if you're one of those purists who questions every aspect of time travel cause and effects, I can't help you. Otherwise, just relax and have fun as Bill and Ted try to save the universe and their marriages. The further into the future they go, the more outlandish their future selves are. Meanwhile, the daughter of their original helper, Rufus (George Carlin naturally gets a shout-out), and a murder robot sent to institute Plan B--killing Bill and Ted (again)--are playing catch up.

The only problem I had with the long time between movies is that occasionally Keanu Reeves just looked too old to be this character again. It's not his fault--in fact, Reeves and Alex Winter race through the movie with the same innocent, zany energy of their first appearance. I think it was the lack of a beard, and long hair that, as my wife put it, actually made him resemble Harry Potter's Severus Snape. Believe me, it didn't prevent me from enjoying the movie.

A special shout-out to Anthony Carrigan, who plays the robot--its actual name is Dennis Caleb McCoy, he points out. It's an hysterical performance that just gets funnier as it goes on. We also get another great mix of historical figures, this time all music related. Oh, and Death. It wouldn't be the same without William Sadler showing up.

My favorite new characters were Bill and Ted's daughters: Thea and Billie basically take on the same job their fathers did in the original Bill and Ted's Excellent Adventure. They're just like their fathers, and they even take on some of the same mannerisms as the older pair. I wouldn't at all mind seeing a sequel headlining the two women--or even a series.

Entertainment Value: 4 out of 4 M&Ms. The ending was a bit abrupt, but otherwise it was plenty of fun.

Oscar Potential: 2 out of 4 M&Ms. Movies aren't easy to make, but everyone makes this one look like a gathering of friends just having a good time. The Academy hates happiness.