Coming Attractions: The History of the Drive-In

This was meant to go out way back a year and a half ago, when Coming Attractions was first released, but somehow it got lost in the shuffle. I decided to post it now to remind everyone that Auburn-Garrett Drive-In is still open and could use the patronage in this particularly rough year for movies ... and also, of course, that Coming Attractions is still available, and I could use the patronage, too!

Remember the joy of going to the drive-in movie theater when you were a kid?

You don't? That stinks.

You're missing a unique experience. All the way back in 1921 a fellow named Claude V. Caver projected films in downtown Comanche, Texas, which people didn't have to use speakers for because the films were silent. In fact, 2018 was the 85th anniversary of when a guy in New Jersey patented the idea to watch movies from the comfort of your car. I do have to wonder how many people thought he was insane, when there were perfectly comfortable movie houses that gave you some extra amount of shelter from the elements, but by the 50s there were four thousand drive-ins in the United States.

Today there are only about 330, with none at all in Alaska, Delaware, Hawaii, Louisiana, or North Dakota.

When I was a kid there were three within a more or less easy drive from my home. One was up in the Angola area, as I recall, and later went to showing X-rated movies (if you can imagine a time when you couldn't stream those directly into your home). One was the Hi-Vue south of Kendallville; because its screen faced the highway, it generally showed family films or other G to PG rated fare. The third, the Auburn-Garrett, had a screen facing away from the road, so that's where any R rated features would show up, at the time. By the time my kids were old enough, only the Auburn-Garrett remained.

So that's where we went, and after my divorce that became a go-to days off trip for my kids and me. Then I married again, and my wife--gasp!--had never been to the drive-in, so as the kids started families of their own I had a new partner for the double feature.

Yeah, the drive-in meant a lot to me.

I like to get there early, to find a good spot. As a writer I'm always looking for more time to write, so I came up with an idea: Why not spend that pre-movie time working on a new novel?

But … whatever would that novel be about?

So, with my kids helping to plot it out and create characters, I outlined a new book about--a drive-in movie theater. Write what you know. The main characters include a single father with two kids, and … well, write what you know pretty much covers it.

While the drive-in that appears in Coming Attractions isn't quite the same as the Auburn-Garrett (for instance, the marquee along the highway is different), that's definitely where I got the inspiration. It's a quirky place populated with some sometimes odd and wonderful people; I hope it will invoke nostalgia in some, and curiosity in others, and bring drive-in theaters more business. It would be great to see my great-grandkids going there, someday. 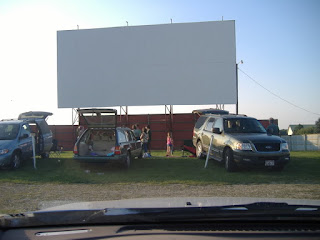