I planned to take a break from long works after reading The Passage, which I described as "War and Peace and More War". But my wife wanted to forge ahead into the sequel, and it's hard to say no considering how good the original was.
The Passage covered an entire century, starting with an ill-advised government experiment (aren't they all?) and ending with a world overrun by what we could loosely call vampires, with a few human settlements hanging on. Two of our constants are Amy, a six year old subject of the experiments, and Arbogast, a government agent who once had a daughter of his own, and against orders decides to protect the little girl.
As The Twelve opens we find ourselves right back at the beginning, following a small group of survivors as they try to escape the virus spreading through America. At first there seems little connection between them and characters from the previous book, but as their paths converge those connections do appear. By the time we jump forward to "present" day we're back with the people from the first novel, including a mysteriously slow aging Amy, who turns out to be the key to evolving events.
Speaking of evolving, the hordes of infected are now under the control of the original experiment subjects--The Twelve--and in a horrible city of human slaves they're planning a new order that could be quite literally a fate worse than death. The only way to stop them: Infiltrate the city, and kill The Twelve. 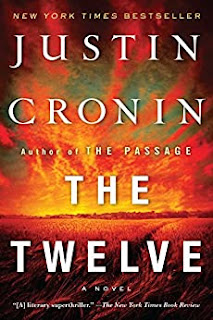 How hard could it be?
https://www.amazon.com/gp/product/B007GBTBMY
The Twelve is epic and complex, and yes, it's long, but my only complaint is that you might have a little trouble keeping track of characters. Luckily Cronin is good at keeping things and people clarified, for which I assume he has a flow chart marching along every one of his office walls. Its been awhile since I've been willing to trade sleep for reading, and this time Cronin is the reason why. The Twelve might not be right for someone looking for a light read, but for anyone who wants to be drawn in and actually care about the characters, this is the place to be.
Maybe--just maybe--The Twelve is actually better than The Passage. If that's so the third book in the trilogy, which we just picked up, will have to be pretty spectacular, indeed. And pretty long.
The City of Mirrors awaits me. If I disappear for a while, don't be concerned.
http://markrhunter.com/
https://www.amazon.com/-/e/B0058CL6OO
https://www.barnesandnoble.com/s/"Mark R Hunter"
Tags: amazon, authors, book review, book reviews, books, fiction, horror, novels, review, reviews
Subscribe

Recent Posts from This Journal