It's not often that a romance novel starts off with the female lead killing somebody.

It's just another day at the office for CIA spy Stella Taylor ... except it shouldn't be, because Stella is retired after thirty years, and there's no reason for her to be targeted by a series of frankly amateur assassins. She flees yet again, this time ending up at a Lake Superior-area Minnesota resort with her movie star daughter and the resort's owner, a hunky Russian who's moved permanently from one cold place to another.

Could the Russian guy also be a spy ...? Nah--what are the chances?

In Her Last Resort, by Fiona McGier, Stella has more than one reason to escape to the lake region: not only to avoid assassins, but to try to make up for the time she spent separated from her daughter--because of being an assassin. It's only after she arrives that sparks fly with the resort owner, Ivan. But boy, are those sparks sparky: Her Last Resort is definitely an adults only read. 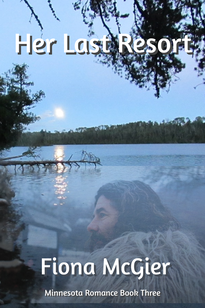 Kudos to McGier for putting her lovers well into their fifties, although they're way more fit than I am! She obviously loves this area of Minnesota and knows her setting, and we get to know Stella and the surrounding characters well as Stella sets about wooing the willing Ivan, making things right with her daughter, and--oh, yeah--finding out who's sending killers after her. Although I knew this was the third in a series, I'd forgotten by the time I actually started reading, and didn't notice any holes--so this can be read as a standalone, or as part of the series.