Military pilot True Brighton was forced out of her job when robotic flying machines made human pilots obsolete. Now she's a member of Requisite Operations, a private military company; as The Last Good man opens, her team is plotting an operation to rescue hostages in the lawless Mideast.

But during the operation, True learns one of the terrorists may have a connection to her son--who was tortured and murdered for all the world to see, after a failed military operation several years before. 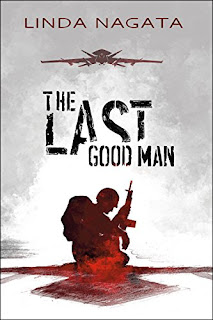 Linda Nagata is one of the masters of near-future science fiction, and in The Last Good Man she shows us a world so close to ours that in a few more years it might not be fiction at all. Dominated by robotics, paranoia becomes real when flying machines or spies the size of bugs can be watching your every move. It's the future of war, and the warriors are beginning to wonder if their future is to be overwhelmed by mechanized weapons.

The Last Good Man starts slowly, as the characters meticulously plan out their opening operation. In that way it's much like a John Grisham or Michael Crichton novel, rich in details that set your firmly into the story's universe. Some readers might not like that, and the first few chapters did drag a little, a few times. But no detail is unimportant, and once the mission starts the book barrels forward like a runaway train.

True Brighton makes discoveries that bring the horror of her son's death back to her, and soon she finds herself at odds with her own team and family, as she investigates a crime that might be much more than anyone thought. All the time she navigates through a paranoid world of constant surveillance, from machines that were once in the roll of spies, but are being weaponized--sometimes without human supervision.

In the end it's a complex and powerful tale. Why Linda Nagata (who was my instructor in a science fiction writing course, back when that stuff was done by U.S. Mail) isn't a bigger name in the writing world is beyond me.