No, Wiping Doesn't Stop a Virus

Let's get to what seems to be the important question, first:

No, I don't know why people are hoarding toilet paper. It's not that kind of virus.

There's so much misinformation about the coronavirus, and it's such an actual threat, that's it's hard to write humor about it. The good news is that a large number of people think it's not as much of a danger as it is, so it's not hard for them at all.

And the toilet paper thing. 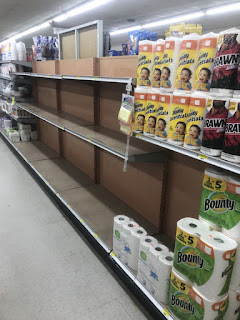 We got lucky, making our routine shopping trip just as the usual suspects started to panic. We actually picked up TP, along with important stuff like books, dog food, the stuff Emily makes me eat because of my cholesterol (which took up most of the cart, darn it), and chocolate.

It was only a few days later when I stopped at the store for some perishable stuff, and saw the empty TP aisle. Why? Enough for a couple of weeks, that I get, but enough to line every room in the house seems a bit much ... although granted, it also works as insulation.

It appears people have been hording stuff like hand sanitizer, soap, and TP not to have enough for themselves, but to resell it and gouge everyone. That's a tar and feather offense, assuming any tar and feathers are available..

I hope there's been a run on condoms, though. Many people who don't have much imagination are going to be looking for things, or people, to do in the immediate future.

Ironically, I didn't have much trouble finding my usual staples at the local store: eggs, milk, bread, all plentiful. What was short? Chicken.

No, I don't get it. We eat a lot of chicken, mostly because it's better for you than donuts, not to mention donuts don't work well in a stew. In addition, baked chocolate doesn't work nearly as well as you'd think, except in Alaska. So, oddly, the first coronavirus problem to hit my home was a chicken shortage.

As for TP, we have it locked up and guarded by the dog. We trust him not to steal it.

Look, it's really not difficult to, um, stretch your TP. Don't replace it with Kleenex--you might need that--but there are always paper towels and napkins. But, as a friend pointed out to me, you shouldn't flush material that thick, so you'll have to bag it up like the astronauts did.

Barring that, if you're anything like me you have a whole basket full of mismatched socks. Why did you keep them? Well, now you know.

The only other choice is to have the National Guard break into homes and arrest hoarders. Do we have enough National Guard troops for that? I don't think so.

But I've given you some options, and it's almost spring, which means there'll be plenty of leaves and plants to go around. Stay away from anything that has the word "Poison" in its name. The hospital might not have time to deal with you.

And, of course, wash your hands, early and often, whether they need it or not. They say you should wash for the length of time it takes to sing "Happy Birthday" twice.

The other day I got that song mixed up with "Staying Alive", which is used to time CPR, and accidentally brought a sink to life. The heart attack victim was still dead, but at least he was clean.