It's Our Sheets and Pottery Anniversary

I can't tell you what I got my wife for our eighth wedding anniversary, because it hasn't arrived yet, and she sometimes reads my blog.

And by "it hasn't arrived yet" I mean as I write this our anniversary's two days from now, and it hasn't frakking arrived yet!.

Luckily, my wife has low expectations of anything that happens during wintertime, including her birthday and Christmas. Here in Indiana, no matter how much The Weather Channel goes on about "meteorological winter", early March is still winter. And how.

Sometimes the best I can do during winter is make the bed, then get back in it again.

She knows I appreciate her, I think. I mean, I drove five hundred miles to propose. I gave in to the idea of getting a dog. I've slept in my car for her. (Long story.) Still, it never hurts to be sure, so Emily, if you're reading this: I appreciate you.

She might not have time to read this, because she's been busy editing one of my novel manuscripts, and in a few weeks I'll be throwing pictures at her. Not literally. (Another long story.)

I should have checked ahead on traditional wedding gifts, because I discovered bronze and pottery are traditional for an eighth anniversary, which I think this is, and I might even be right. Guys, if you want advice, pottery is a no-go. It seems too much like ... dishes. You don't want to go that way.

Bronze isn't easy either--I think she'd have liked bookends, since we have lots of books and it could be a way to say we go together, or at least that we go together with books between us. But what if I somehow get her angry? Have you ever been hit by a bronze bookend? Me neither, but it would probably hurt.

What I'd really have liked to get her, if I'd gotten off my butt and researched in time, is a Bronze Age sword. Yeah. She likes swords, and it would have been really cool, although it does bring back the question of her getting mad at me.

Well, if she doesn't like what I did get her, I could always have myself bronzed, then have the statue draped with lace. I'll let you know. 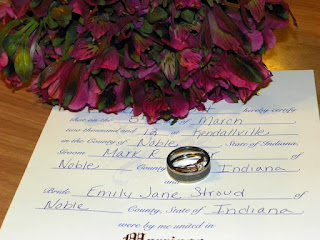