On her birthday, my wife suggested we go see the new Star Wars movie.

And now you know why I married her.

So, how much do you want to know about Star Wars: Episode IX - The Rise of Skywalker? I think I'm going to go spoiler free, because that will make this much, much shorter. First of all, if you hate fan service, forget it. (Fan service has different meanings. In this case I'm going with when movie makers put something into the flick that's not necessary to the story, but is just put in to make the fans happy.

I love fan service. I mean, I'm a fan, and I want to be happy. My writing instructors would be horrified ("Remove anything that's not story!"), but what the hey. 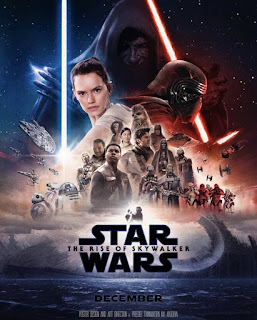 When you're dealing with the ninth movie in a series, it's hard not to have fan service. As we begin there's been so much history, even with the newer characters, not to mention characters like Leia Organa (Carrie Fisher's last movie appearance. I promised I wouldn't cry ... *sob*)

As we open two of the big three Star Wars characters have died--um, surely you're not worried about spoilers from the last movie, right? The one left is Leia, who we don't see all that much of for obvious reasons, but all three of them loom large in the story as their friends discover a new threat that's way, WAY bigger than the First Order they've been battling against. There's not a lot of infighting among our heroes this time (but plenty of welcome bantering) as they try to track down and neutralize the new threat, while Rei trains under Leia's direction to become a Jedi.

And that's about all I'm going to say about the plot, other than that at the end, it revolves around the conflict between Rei and Kylo Ren, as well as within them. It involves the reappearance of a lot of old friends, some of which are expected and others very surprising. We even get a few new characters, who manage to fit in as best they can. 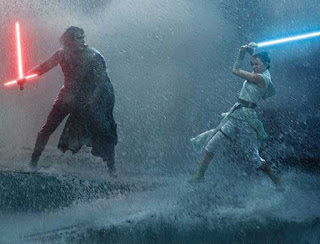 And there you have the biggest problem with Star Wars: Episode IX - The Rise of Skywalker: There are so many characters, and so many strings to tie up (although they mostly do get resolved), that it's hard for everyone to get enough screen time. The movie's well over two hours, but I wonder if it wouldn't have been better stretched into a TV miniseries--or if that would give us too many endings and goodbyes, as with the last Lord of the Rings movie.

There were a couple of spellbinding moments from the trailers that turn out disappointing, as the actual moments come and go without much development past what we already saw. There are also those who will see similarities between this movie and Return of the Jedi, and they're not wrong.

There's a great mix of action, plot, and character--heavy on the action, but after all, the word "wars" is in the title. We get solid acting, awesome effects even by modern standards, a good score, and although we never get the answers we sought about Snoke, this movie's villain has an actual history and connection with our heroes. You may cheer a little, and maybe even shed a tear. I did. 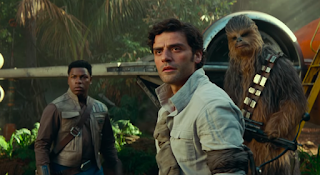 Entertainment Value: 4 out of 4 M&Ms. Okay, maybe not the brown ones, but if you fall asleep at this movie, get checked for narcolepsy.

Oscar Potential:  3 out of 4 M&Ms. You know, if they took out the space and laser swords and set this plot and these characters into some historical adventure, they're be raking in the statues.