I Hear the Blurbing of a Newborn Book

As you probably know from the previous cover reveal, we've birthed a new book, and I didn't even take an epidural.

Kidding! It doesn't work that way, although sometimes it seems like it. Certainly gestation takes forever.

Print and website presence to come, but you can already pick up this infant book on Kindle:

But don't you want to know what you're getting? Okay, here's the blurb I wrote for the book I wrote about columns I wrote, and no wonder my fingers are tired. It's being added for sale in various places that you can bet I'll talk about, at least all through Christmas season. 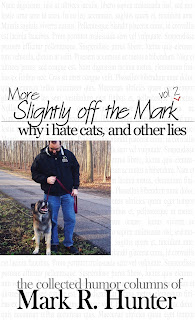 Who would have thought the turn of the last Century would one day be ancient history?
In More Slightly Off the Mark, Why I Hate Cats, and Other Lies, former newspaper columnist Mark R. Hunter went back to collect his humor pieces from 2000 and 2001—the earliest ones to be put on a computer. In DOS format ... on a floppy disk.
The amount of change in just twenty years resulted in Hunter completely rewriting the columns, and inserting his present self (and his dog, Beowulf, through pictures) into the work—mostly to make fun of his younger self. Along the way Mark riffs on everything from history to health, vacations, holidays, housework, and of course technology. And weather. Because everyone talks about that.
In a more serious section Hunter also tackles the 9/11 attacks … because those were the times we lived in.
Some of the chapters include:

Advice From the Clueless
I Ran Out of Excuses to Write About Excuses
When Bad Cities Happen to Good People
Civil War, Summer Vacation—Same Thing
I Just Can’t Stand Intolerant People
The Next Big Step in Medical Disasters
And, of course: Age Ain’t Nothin’ But a Number, But It’s a Really Lousy Number
Mark R. Hunter’s humor column was published in newspapers for twenty-five years, and he notes there’s little than can be done to stop him from collecting more of them in the future … although state and federal laws are pending.
Mark R. Hunter lives in small town Indiana with his wife/editor/book designer/cover artist/supervisor Emily, their dog Beowulf, and a cowardly ball python named Lucius. Mark thinks he's a Hufflepuff, but keeps testing Slytherin.
Tags: book release, books, humor, humor writing, more slightly off the mark, slightly off the mark
Subscribe